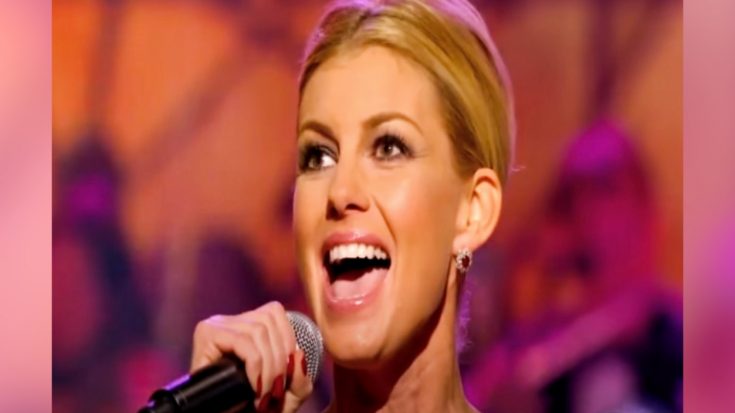 Faith Hill released her first Christmas album in September 2008. Titled Joy to the World, the album contained Hill’s versions of beloved Christmas songs such as “The Little Drummer Boy,” “O Holy Night,” and “Winter Wonderland.” It also included the original song “A Baby Changes Everything,” which was a #1 hit on the Adult Contemporary chart.

Of course, Joy to the World also featured Hill’s rendition of its title track.

LET'S PROMOTE THE LOVE OF MUSIC

Faith Hill- Joy To The World

Joy to the World is the first Christmas album and seventh overall studio album by American country music singer Faith Hill. The album was certified Gold by RIAA on December 4, 2008. pic.twitter.com/YmIG7zfXfX

Hill performed “Joy to the World” many times after her Christmas album was released. There are several videos of her singing the song live, including the one we’re about to share.

People have started searching for their favorite Christmas performances now that the holiday season is in full swing. One video people love to revisit was uploaded to YouTube on Christmas Eve in 2008. The clip is from a past holiday special on CBS, and shows Hill beautifully singing “Joy to the World.”

Hill opened the song on her own while the crowd started clapping along to the beat of the music. Then the choir that gathered behind her started singing while she made her way to a circular platform at the front of the stage.

Everyone ended the song together, with Hill singing lead while the choir chimed in with their breathtaking harmonies. The final notes of the performance are sure to give you goosebumps!

The audience clearly loved what they heard, because they erupted with cheers and applause once the song ended.

You’re also sure to be in awe when you head below to watch Hill’s glorious rendition of “Joy to the World.” It’s no wonder why this clip resurfaces at the start of every Christmas season…