Remember When June Carter Played A Saloon Girl In “Gunsmoke”? 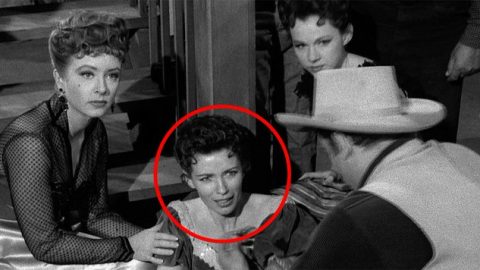 June Carter made one of her first television appearances in a 1957 episode of Gunsmoke, as the saloon girl, Clarise.

In the Season Two episode titled, “The Man Who Would Be Marshal,” June had her first credited acting role.

June was only 28 years old during her brief role as the saloon girl in the 37th episode of the second season of Gunsmoke, long before she met and married her future husband, Johnny Cash.

Gunsmoke was an American television Western drama series created by director Norman Macdonnell and writer John Meston. The show’s stories take place in Dodge City, Kansas, during the settlement of the American West. The main character of the show is lawman Marshal Matt Dillon, played by James Arness.

The television show spanned 20 seasons from 1955 to 1975 and had 635 episodes in all. It was televisions number one ranked show from 1957 to 1967. Gunsmoke won multiple Primetime Emmy Awards throughout its 20-year run, including Best Action or Adventure Series in its first year airing. The episodes aired in black and white until 1966, when the episodes started to be shown in color.

On this date in 1955, the iconic western drama series #Gunsmoke premiered on CBS starring #JamesArness as Marshal Matt Dillon, and introduced by #JohnWayne. pic.twitter.com/KQcGPHR8Dr

Watch one of June Carter’s first television appearances with Roy Acuff representing the Grand Ole Opry in 1952 below!