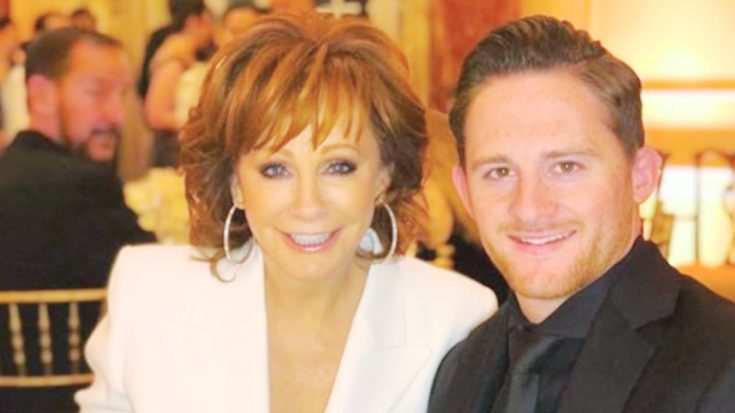 Even though Reba McEntire and her ex-husband, Narvel Blackstock, divorced years ago, Reba still considers herself to be a grandmother to her stepchildren’s kids. Two of her grandkids belong to Kelly Clarkson, who shares daughter River and son Remington with Reba’s stepson, Brandon Blackstock.

But when it comes to biological grandchildren, Reba has none. Her only child, son Shelby, doesn’t have any kids of his own yet. At least, not any human kids.

You see, Shelby and his girlfriend Marissa made Reba a grandma by welcoming a puppy into their home. The cute corgi pup, named Watson, is the star of his parents’ social media accounts.

While there are many cute photos of Watson to be found on Shelby and Marissa’s Instagrams, no picture warms our hearts more than one Reba had to share. Back when Watson was still just a baby, Reba posted a sweet picture from a breakfast date she had with him and Shelby.

“My grandson, Watson, was a very good puppy yesterday during breakfast and my visit with Shelby,” Reba wrote, including the #toocutetobelegal.

My grandson, Watson, was a very good puppy yesterday during breakfast and my visit with Shelby. #toocutetobelegal @shelbyblackstock #roadtrip #grandma #watson

Now, Reba has another super cute “grandkid” to love all over, because Shelby and Marissa just got a new puppy!

With Watson approaching his second birthday in November, Shelby and Marissa felt it was time to expand their brood. And they did so by welcoming a gorgeous husky pup into their home!

Shelby introduced their new family member on Instagram through a couple of photos. In the caption, he also revealed her name.

“Meet our new girl, Belle!” he wrote. We think that’s a fitting name for her, since the definition of “Belle” is “a beautiful girl or woman.” And little Belle is definitely a beautiful girl!

Marissa also shared a couple of photos of Belle, including one with her big brother, Watson. For those curious to know what Watson thinks of his new sister, Marissa let everyone know that he’s smitten.

The corgi’s affection for his new husky sister can be seen in the second photo Marissa shared. Just swipe through the below slideshow to see their sweet interaction.

Welcome to the Blackstock/McEntire family Miss Belle! We can’t wait to see Reba’s first photo with her new grandpuppy!

It’s no wonder why Reba is so attached to her furry grandkids. Shelby is her whole world, as you can tell by tuning in to the clip below.

She loves her son so much!