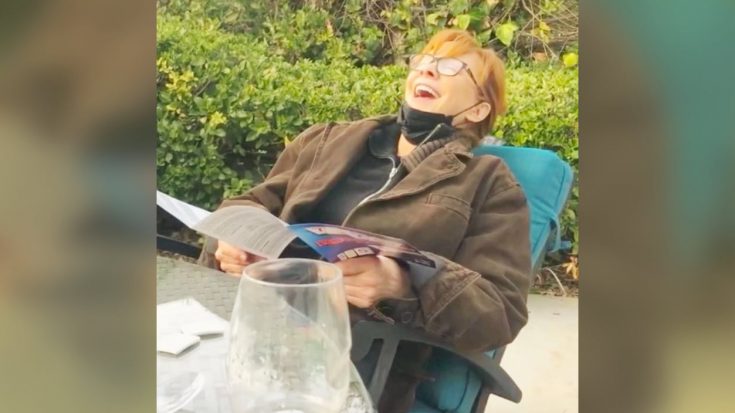 Anyone who has ever watched the sitcom Reba will tell you that Barbra Jean is one of the funniest characters on the show. Played by actress Melissa Peterman, Barbra Jean was “the other woman” who got involved with Reba’s husband, Brock.

Despite this (and the fact that Barbra Jean’s over-the-top behavior often got on her nerves), Reba and Barbra Jean became friends.

Some people may not know this, but Reba and Melissa are also friends in real life! The two are extremely close…so close that they even host a podcast together called Living & Learning.

Like their Reba sitcom characters, Reba and Melissa are hilarious whenever they are together. One clip Melissa shared on social media proves it!

Reba and Melissa recently got together for an outdoor, socially distant game night. They were playing rummikub, which is a tile-based game that combines elements of rummy and mahjong.

While playing the game, Melissa challenged Reba on one of the rules. She said she “rarely” does this, but was glad she questioned Reba this time around.

The video Melissa posted shows Reba reading through the instructions and explaining the rules. She eventually reached a point where she realized Melissa was correct in challenging her.

She shook her head and said, “Wow, you’re right Melissa.”

Melissa was tickled to hear that, and asked Reba, “Wait, can you say that louder? I’m video taping this.”

Reba and everyone else at the table cracked up laughing at that comment. Melissa clearly got a kick out of the whole thing, as she wrote, “I’m thrilled I had the camera on…”

Melissa also included some pretty comical hashtags in her post, such as “#wetakeourboardgamesseriously.”

Tune in below to see the hysterical clip Melissa filmed during her and Reba’s game night. We love their friendship!