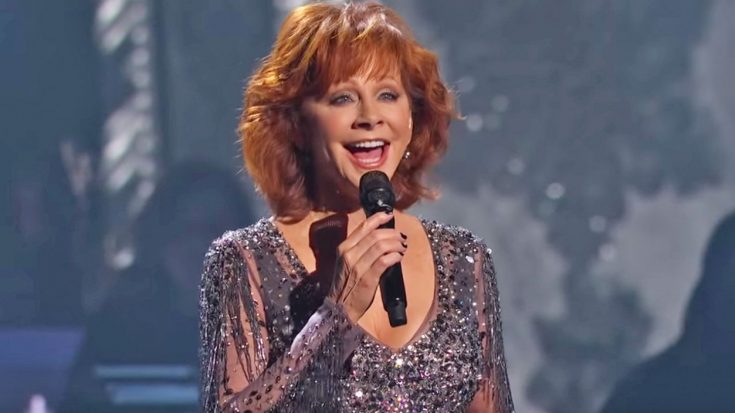 Leave it up to Nashville to ring in the holidays in the best way possible: spreading Christmas cheer for all to hear… literally. CMA is hosting their ninth annual CMA Country Christmas with some special guests taking the stage to perform. Reba, who is hosting for the second year also put on a spectacular performance for the holiday music broadcast.

Up early this morning talking about #CMAchristmas airing tonight! Had to wear my #RebaAtDillards Dillard's sweater! http://bit.ly/RebaRedSweater

It's FINALLY here! Celebrate #CMAchristmas with my friends & me TONIGHT at 8|7c on ABC Television Network! ?

As the country star entered the stage surrounded by giant Christmas trees and festive presents, she lit up the stage with her presence. Dressed in a stunning sparkly silver gown, she gracefully began to serenade the audience.

The singer took on her own rendition of Dolly Parton‘s “Hard Candy Christmas.” The original tune, which was written for the musical The Best Little Whorehouse in Texas, was sung by Parton in 1982. Since its release, several country artists have covered the soulful song. In 2016, Reba recorded a cover of the song for her My Kind of Christmas album.

Accompanied by a piano, Reba’s vocals resonated throughout the venue. Her unique twangy voice set the perfect tone for the Christmas melody. As the country icon began to finish singing her final few notes, the crowd hollered in excitement and support over her performance.