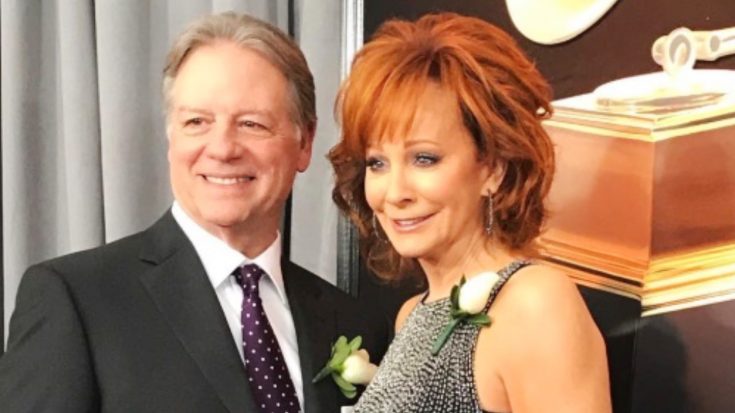 Reba McEntire and Anthony “Skeeter” Lasuzzo met in the beautiful town of Jackson Hole, Wyoming in 2017. While on a trip with some of her girlfriends, the group thought it would be a good idea to have a local tour them around. That’s when Reba and Skeeter crossed paths.

But their introduction came as a complete surprise for the singer. She told PEOPLE, “I was not looking. Not even interested.”

Luckily, they ended up seeing each other again on the trip.

“We just had the best time. And so two nights later, we all went out to dinner and he bought my dinner.”

It wasn’t long before she was back in Jackson Hole going on her first date with the photographer. Reba gushed, “I was there almost a week and we spent every day together.”

Skeeter took Marti and me hiking 24 miles in 4 days!! Loved it!!! #skeeterlasuzzo #lovejackson

Skeeter has accompanied Reba to her many award shows and ceremonies – the singer even admitted they like to color coordinate! Not to mention the couple were quite the pair of jet setters! From Iceland to Italy, their love was marked all across the globe.

As their relationship blossomed, Reba opened up about how the pair feel toward one another.

“We’re totally in love – absolutely.” She continued, “I wouldn’t put up with somebody for two years if I wasn’t in love with ’em!”

Sadly, their love has ended, and Reba confirmed it herself during an interview with Us Weekly on Wednesday, October 30. The 64-year-old was doing press for her animated film Spies in Disguise.

She was asked if she and Skeeter were excited about spending the upcoming holidays together.

She said, “Skeeter and I broke up in May, so, unfortunately, we will not be spending that time together. We still talk and we’re friends, but just decided to go our separate ways.”

We had been wondering if things were okay between the two, seeing as the last photo McEntire posted of Lasuzzo was on April 7 when they were in Las Vegas for the ACM Awards, which the singer hosted.

He also joined her on the red carpet prior to the show.

We wish Reba and Skeeter the best.

Watch this tribute to Reba at the Kennedy Center Honors, where Skeeter was by her side.