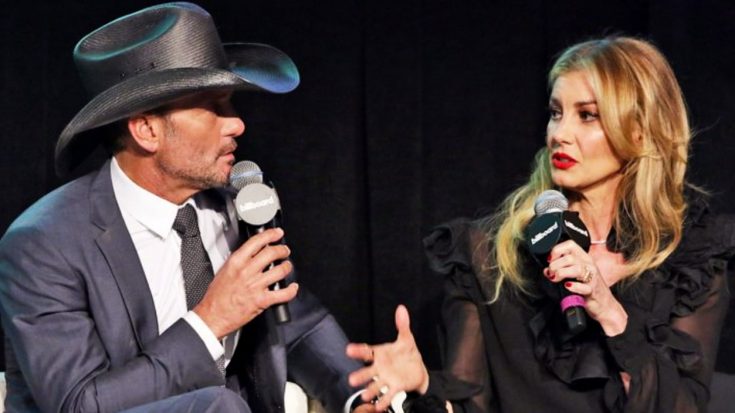 On November 5, Tim McGraw released a new book titled Grit & Grace: Train the Mind, Train the Body, Own Your Life.

The book follows McGraw’s personal fitness and health journey that he started years ago. It also offers guidance and encouragement to those who want to turn their lives around like he did.

Really excited to share the cover of my new book #GritandGrace coming this fall and now available for pre-order. I believe that getting and staying fit is a lifelong, always evolving practice that makes us better for ourselves and the ones we love. Anyone can do it. We wrote Grit and Grace to give you a little of my fitness story along with some practical HOW’s and WHY’s to inspire you to make health and fitness a part of your life journey. (Link in bio)

There were a few things that prompted McGraw’s lifestyle changes over a decade ago. While speaking to TODAY‘s Hoda Kotb, he recalled how his eldest daughter, Gracie, saw him in a movie trailer and commented on the puffy appearance of his face, saying, “Jeez, Dad, you need to do something.”

That was one catalyst to McGraw changing his life and eventually dropping 40 pounds. That was made possible after he began a fitness routine, started eating healthier, and stopped drinking.

Drinking was something that McGraw admits he did a lot of before he started his journey to better his health. He told Kotb that after he achieved success in his career, there were an endless amount of parties going on. And he was often in attendance.

This was something that didn’t sit well with his wife, Faith Hill, with whom he shares three daughters: Gracie, Maggie, and Audrey.

“And all of a sudden your wife looks at you and says, ‘You know, you’re getting a little overboard and you need to make some decisions.’ It makes a big impact on you,” McGraw told Kotb

“Grace is something that we all need, especially in this world today that there’s not enough grace…you have to learn to give yourself grace.” @TheTimMcGraw talks about his new book Grit and Grace, out tomorrow, via @TODAYshow: https://t.co/opwJu86eG2 #GritandGrace

In Grit & Grace, McGraw writes that over ten years ago, Hill gave him an ultimatum.

“My emotional absence was noticed and it was not scoring any points,” he said.

While McGraw said that Hill always supported him and showered him with “unconditional love,” she knew he needed a little tough love in its place. She gave him a choice to make, and that choice was one that changed McGraw’s life forever.

“Getting real like only she can do, Faith told me, ‘Partying or family, take your pick,'” McGraw recalled in the book.

As we now know, McGraw chose his family.

He has now been sober for over ten years and has maintained a daily exercise routine. As a result, he is in great health, physically and mentally.

Who’s to say what would have happened if Hill had never given McGraw that ultimatum so many years ago. He knows he owes a lot to her, and credits her for giving him the reality check he needed to turn his life around.

You can listen to McGraw talk more about his health and fitness journey in the clip below.