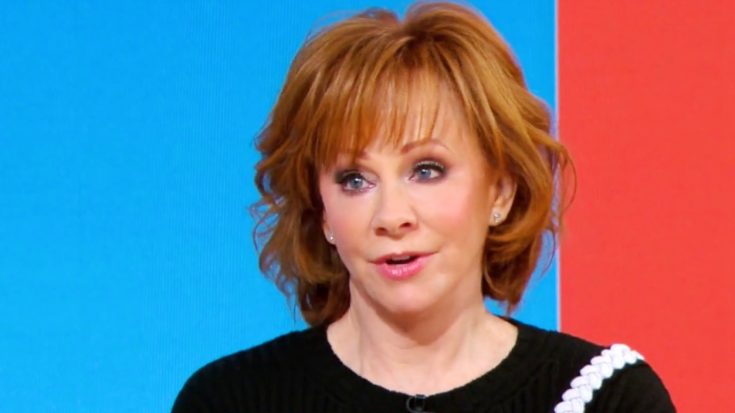 She might be back to host the Academy of Country Music Awards for the second year in a row, and 16th year in total, but Reba McEntire is not happy with them right now.

The “Stronger Than The Truth” singer had a full week of press to talk about her big hosting gig as well as her upcoming album and current single. She stopped by CBS This Morning, Build, The Late Show with Stephen Colbert, as well as Watch What Happens Live.

Looking forward to being in NYC this week to talk about the #ACMawards and #StrongerThanTheTruth! Check Reba.com for exact times.

But before her segment on CBS This Morning began, she took to Facebook Live to reveal nominations in two categories – Song of the Year and Songwriter of the Year. See it below.

Announcing the ACM – Academy of Country Music Awards Song of the Year and Songwriter of the Year! I’ll be announcing more categories on CBS This Morning at 8:30!

During the broadcast, and with the help of hosts Gayle King and Norah O’Donnell, McEntire announced that the Duo of the Year nominees are Brothers Osborne, Dan + Shay, Florida Georgia Line, Locash, and Maddie & Tae, while Group of the Year are as follows: Lady Antebellum, LANCO, Little Big Town, Midland, Old Dominion.

She then revealed that Dierks Bentley, Luke Combs, Thomas Rhett, Chris Stapleton, and Keith Urban are up for Male Artist of the Year, while Miranda Lambert, Ashley McBryde, Maren Morris, Kacey Musgraves, and Carrie Underwood are nominated for Female Artist of the Year.

Posted by ACM – Academy of Country Music on Wednesday, February 20, 2019

Watch her reaction to the all-male Entertainer of the Year category below.

How do you feel about the Entertainer of the Year category being all male? Which female country artist do you feel belongs in the category? Let us know in the comments section.

This isn’t the first time McEntire has spoken out against the Entertainer of the Year category. Just last year the category had the exact same nominees, and after revealing them, McEntire said, “It’s disappointing that there’s no female in the Entertainer of the Year category. But the country music business is very cyclical. It’ll go very traditional with the music or it will go very contemporary. The girls dominate or the boys dominate, so, it’s coming around. I have faith.”

Entertainment Tonight revealed the rest of the nominees.

Thanks to Entertainment Tonight for sharing the #ACMawards nominees for the following categories:New Male Artist of…

Posted by ACM – Academy of Country Music on Wednesday, February 20, 2019