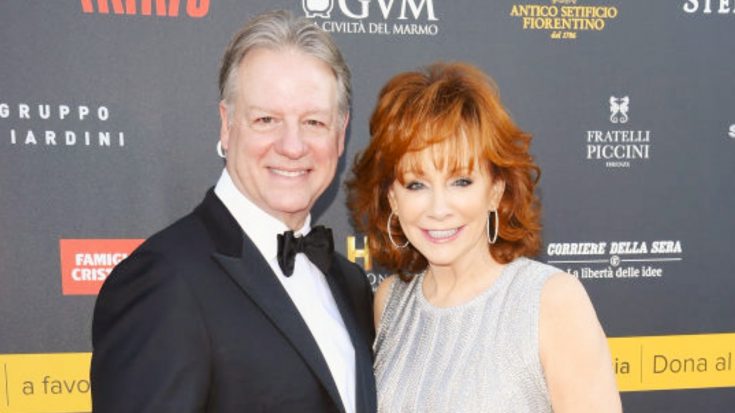 In 2015, country fans were stunned over the news that Reba McEntire and her husband, Narvel Blackstock, were divorcing after 26 years of marriage.

As Reba said many times before, the divorce wasn’t her idea. “It was really hard to make the adjustment when someone’s not happy,” she told CMT in an interview.

Sing it Now then turned into a major honor…the Grammy Award for Best Roots Gospel Album. Reba accepted the award during a ceremony that took place prior to the televised show.

Since Sing it Now was Reba’s first gospel record, this obviously marked the first time she had ever won a Grammy for gospel music. The night was also marked by another big “first” for the country superstar…it was the first time she ever walked the red carpet with her boyfriend, Anthony “Skeeter” Lasuzzo.

As Reba arrived at the Grammys, people couldn’t help but notice the man that accompanied her. Many eagle-eyed fans recognized the handsome man from some of Reba’s past photos on social media.

When an ET reporter asked Reba who her date was for the night, she didn’t hesitate to introduce him as her boyfriend.”My date is Skeeter, come here Skeeter,” Reba said. “Skeeter Lasuzzo. He’s my boyfriend.”

Since then, Skeeter has attended a number of other big events with Reba. But it seems that the couple has fun no matter where they travel…and they travel a lot!

What an incredible trip! Skeeter and I had a blast in Iceland! I highly recommend it! #GoSeeIceland

For those of you who can’t help but gush over every new photo Reba shares with Skeeter, you’re in luck. She once shared a big batch of candid snapshots from events and their various travels, and they’re all too cute for words.

The photos show just how much Reba and Skeeter enjoy life together, no matter where they are or what they’re doing. This is the feeling that Reba was hoping to capture, as she wrote in the caption, “Whether we’re in the mountains of Wyoming or in Italy, flying or riding the train, Skeeter and I have a great time!”

You can tell how much they enjoy each other’s company!

Whether we’re in the mountains of Wyoming or in Italy, flying or riding the train, Skeeter and I have a great time! #toomuchfun #globetrotters #skeeterlasuzzo

It warms our hearts to see Reba at such a happy spot in her life. We wish her and Skeeter many more joyous years full of fun and adventures.