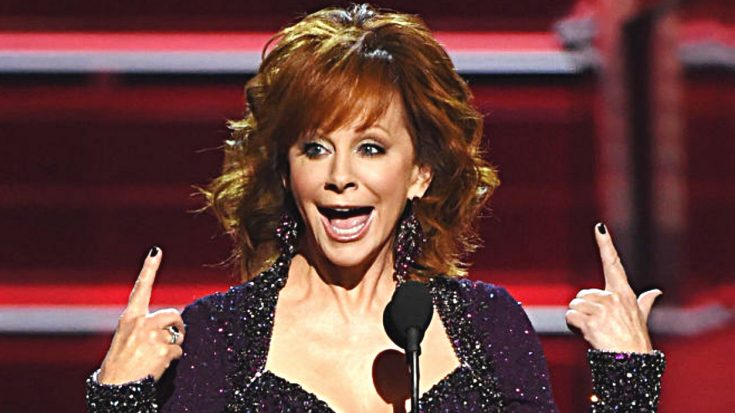 Anyone who has ever watched McEntire’s sitcom Reba, or seen her play Colonel Sanders in commercials for KFC knows that she has a strong funny bone. She sported her comedic chops during her monologue for the ACM Awards this year, and had the crowd in stitches over several of her jokes.

One joke that got a real rise out of the crowd is when McEntire spoke about her predecessor hosts, Luke Bryan and Dierks Bentley, and previously, Bryan and Shelton. Joking around with the guys, she said how the ACM finally figured out that they could use a woman to accomplish the job of two men.

That joke had the entire audience on its feet. McEntire just soaked in the applause and the laughter for a while before she continued on.

Another one of our favorite jokes that McEntire told had to do with Chris Stapleton. In case you weren’t aware, Stapleton and his wife are currently expecting twins, which are due any day now.

Because of this, Stapleton was unable to make the ACM Awards. But he could still be the big winner of the night, as he is up for the Entertainer of the Year Award!

McEntire mentioned that in her monologue, and brought up the fact that if the twins are born, then they could win for New Duo of the Year!

Those are just a few of our favorite jokes from McEntire’s hysterical opening monologue at the ACM Awards. We don’t want to spoil it for you if you missed it, so be sure to check out the video of her entire monologue below!

If you did see it, then you already know how funny it is. And therefore, know it’s worth watching again.

It’s good to have McEntire back as the host of the ACM Awards!