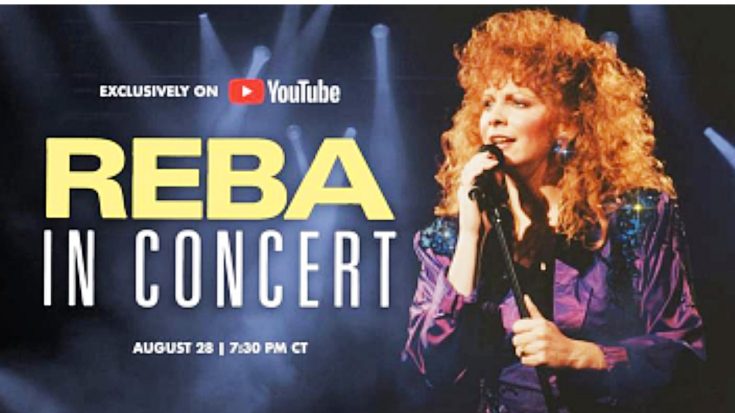 On Wednesday, August 26, 2020, Reba McEntire revealed on social media that she would stream her 1990 concert on her YouTube channel this Friday.

The concert is exclusively streaming on Reba’s YouTube channel and titled Reba In Concert.

The concert was originally filmed at the Frank Erwin Center in Austin, Texas, during Reba’s 1990 tour. The concert includes sixteen performances including some of Reba’s biggest hits, “Fancy,” “You Lie,” and “Whoever’s in New England.”

The 1990 concert features Reba’s original band members, who were tragically killed in a plane crash a year later on March 16, 1991.

28 years ago today, seven members of Reba's band, and her tour manager, died in a plane crash. Even though all this time has passed, not a day goes by where she doesn't miss them.

Reba dedicated this concert in Texas and the stream to her band members and tour manager that were tragically lost that day.

“This show is very special to me because it features my friends that we lost in a plane crash 29 years ago. Their love for music and incredible talents deserve to be seen again, and I’m so glad that we’re getting the chance to stream this concert for the first time ever. I can’t wait to watch it and I hope they will feel all the love we still have for them.”

#RumorHasIt there might be an announcement about our next streaming concert this week! Stay tuned! ?: @erwincenter

The entire concert will stream on YouTube this Friday, August 28, at 8:30 pm ET and 7:30 pm CT. You can set a reminder for yourself by clicking here.

Watch the announcement and preview of the concert below.