Reba Explains Her Conversation With Cher About The National Anthem 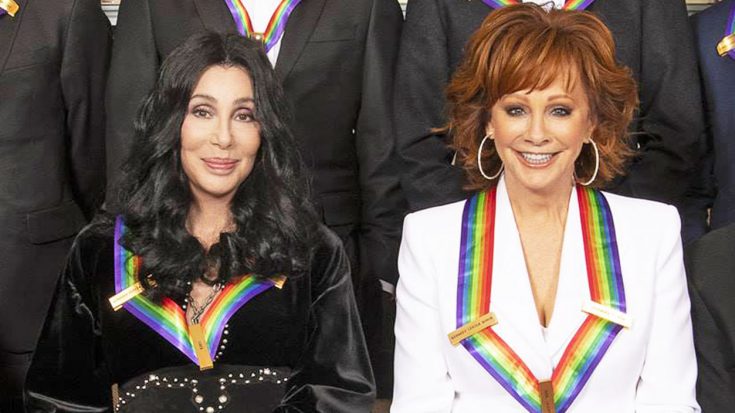 Facebook / The John F. Kennedy Center for the Performing Arts

At the 41st annual celebration of the arts, the Kennedy Center recognized some amazing people and all their hard work. Each of the honorees has brought something uniquely special to the music world, leaving an unforgettable mark. One of these honorees being country music icon, Reba McEntire.

The four 2018 Honorees included singer and actress, Cher, composer and pianist, Philip Glass, jazz saxophonist, and composer, Wayne Shorter, and of course, the widely talented Reba. A special addition included the co-creators of Hamilton who were also honored.

Thanks for tuning in to tonight's #KCHonors broadcast! What was your favorite moment?? John Paul Filo for CBS

Posted by The John F. Kennedy Center for the Performing Arts on Wednesday, December 26, 2018

While a series of powerful tribute performances were put on for each artist, it was a magical night. Kelly Clarkson, Lady Antebellum, Brooks & Dunn, and Kristin Chenoweth all paid honor to the redheaded queen herself. Following the night, Reba admitted just how special it was for her – thanks to everyone involved.

Her night was so special that the beautiful blue gown she wore has been put on display as part of the American Currents exhibit at the Country Music Hall of Fame and Museum in Nashville. While admiring her honor, she gushed about the celebration to ABC News Radio Online.

“That was a wonderful weekend, to get to sit up there with Cher,” the singer admits. “And to be on that list of names, that’s a big deal. It was really big to me. I think I’m the seventh of the country music family to be inducted, so I was really thrilled.”

Excited to see my @kennedycenter dress and medallion on display at the new #AmericanCurrents exhibit at the @officialcmhof!!!

When asked what the two musical icons talked about the ceremony, Reba explained,

“The only time we really got to visit is right before the curtain went up and the beautiful lady came out and sang the national anthem.”

Reba continues, “And [Cher] said, ‘Oh my gosh, I wouldn’t be able to do this. Have you ever sang the national anthem before?'”

“And I said, ‘Well, to tell you the truth, that’s where I got my start in the music business.'”

Nonetheless, it was a true blessing to get to see these industry-changing artists together in the same place!