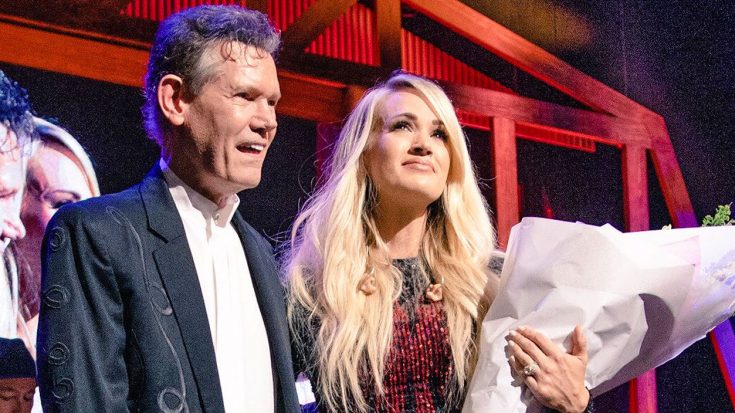 Ten years ago, country singing sensation Carrie Underwood stood on the Grand Ole Opry stage and performed her rendition of Randy Travis‘ 1988 hit song “I Told You So,” which they turned into a duet in 2009.

Unbeknownst to Underwood, Travis was waiting to surprise her off stage. After she received a round of applause for her performance, he walked out and gave her the surprise of a lifetime!

“That’s a better performance that I will ever do of that song. Thank you,” he said. “I’m honored.”

The surprises didn’t end there! Moments later, he invited her to become a member of the Grand Ole Opry, which she of course accepted. Watch it all go down in the video below.

Fast forward a decade, and Underwood was at the Grand Ole Opry for a few performances – this time celebrating her tenth anniversary of being an Opry member! Once again, she performed “I Told You So,” and once again Travis was there to surprise her.

“Ten years have flown by. I knew from the moment God blessed me and let me sing country music that I wanted to be a part of this place. Thank you for being here,” Underwood said, according to NewsOK.

It was @randytravis who invited @carrieunderwood to join the #Opry Family 10 years ago, and he made a surprise visit to celebrate with her tonight! ✨ #OnlyTheOpry pic.twitter.com/LBxqlCoNSY

Underwood took to Instagram after the eventful night to thank everyone who had a part in it, including Travis, Garth Brooks, who sent her flowers, and Brad Paisley, Vince Gill, and Crystal Gayle, who all offered some very kind words.

What an incredible night celebrating 10 years of being in this amazing @opry family. Thank you, #RandyTravis for always being so sweet to me! Thanks, @garthbrooks for the flowers! Thanks @bradpaisley #CrystalGayle @vincegillofficial and @reba for the kind words and messages! A special thanks to my Opry family and all the people on my team for the wonderful surprises! Thank you, fans, for all the love and support you have always given and continue to give. Thank you @iveycakestore for the beautiful and delicious cake. And, last, but not least, thank you to the Bologna Lady and my @umgnashville family for being here to celebrate!!! My heart is full…

Check out a montage of clips from the night below!