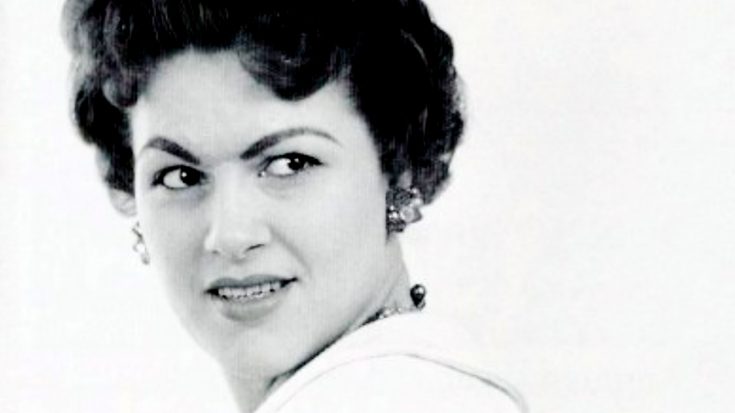 The Impact Patsy Had On The World

During her era, Patsy Cline was one of the strongest voices country music could claim. It didn’t take long for the talented singer to rack up a number of hits, including “I Fall to Pieces” and “Crazy.”

She blazed a trail for artists who followed in her footsteps, such as Loretta Lynn, who considered Cline to be one of her dearest friends. Those who found themselves influenced and inspired by Cline fully believed that she’d be around to guide them for decades more.

However, those artists ended up losing their dear role model and friend in the blink of an eye. Cline was only 30 years old when she was involved in a plane crash on March 5, 1963.

Cline and everyone else on the plane lost their lives that day.

Her passing was so sudden that no one could have predicted it. No one, that is, except for Cline herself.

She Knew Her Time Was Short

Eerily, Cline seemed to know that a tragic fate awaited her down the line. She had already made it through two near-death experiences before: the first being a bout of rheumatic fever when she was a child, and the second being a 1961 car crash in which she was severely injured.

The singer was previously involved in another accident, though this one was much worse.

Following the latter car crash, Cline made it clear that she wouldn’t be so lucky the next time she’d have a brush with death. Legend has it that as she was leaving the Opry the week before her death, she said these chilling words to Ray Walker of The Jordanaires:

“Honey, I’ve had two bad ones. The third one will either be a charm or it’ll kill me.”

1963 Backstage at the Grand Ole Opry, Patsy Cline makes a chilling prediction to Ray Walker, of The Jordanaires, referring to her previous auto accidents: "Honey, I've had two bad ones. The third one will be a charm, or it'll kill me." It's her last Opry show. pic.twitter.com/u53zy5fBx8

But Cline seemed to have fears about her tragic fate long before she ever uttered those words to Walker. In fact, one author uncovered and published the contents of a spontaneously written will the singer penned in April 1961, shortly after the birth of her son, Allen, who she called “Randy.”

The contents of the will, which was never legally filed, can be found in Douglas Gomery’s book Patsy Cline: The Making of an Icon.

Cline gave birth to her son in late January, and although the pregnancy had been hard on her, financial difficulties forced her to hit the tour circuit again by April. In this state of exhaustion and worry, the 28-year-old frantically penned her will.

Where was she at the time? On an airplane…

so we’re just gonna forget about how Patsy Cline predicted her own death?

What Did The Will Say?

As if that wasn’t chilling enough, Cline wrote her spontaneous will on Delta Airlines stationary. She opened the will by declaring that she wanted her two children to be placed under her mother’s care should anything happen to her:

“I…leave to Hilda Virginia Hensley my mother, my children Julia Simadore Dick and Allen Randolph Dick to be cared for, and raised by the best of her ability until they are eighteen years of age.“

She wrote that her husband and the children’s father, Charlie Dick, could visit them, but that they must “remain” in her mother’s home until the reached adulthood. She also named her mother as the recipient of her royalties, that way she could use the payments to care for the children.

Cline then went in great detail as she listed who she wanted to take possession of certain items of hers, including her awards.

Then, in the most chilling declaration of all, she described exactly what she wanted to be buried in:

“I wish to be put away in a white western dress I designed with my daughter’s little gold cross necklace and my son’s small white testament in my hands.”

From the archive: a rare color photo of Patsy performing in her famous red Western wear. This dress is on display now at the Patsy Cline Museum! If you could see Patsy perform live, what song would you want to hear? pic.twitter.com/xqTx3odB5G

What Compelled Her To Do This?

Those are some haunting words, aren’t they?

There’s no telling why Cline felt compelled to write out her will that day, two years before her death. Gomery speculates that she could have been suffering from Postpartum Depression, since she gave birth to Randy just months before pushing herself to tour again.

Whatever the reason, in that moment and on a number of other occasions, Cline expressed that her days on this Earth were numbered. No one believed her, or at least, no one wanted to believe her. Then just like that, as she had long predicted, she was gone.

Although Cline is not with us today, her legacy lives on. Because of her incredible music, generations to come will be able to say they’ve been influenced by the legendary Patsy Cline.