Musicians Battle It Out In Deliverance’s “Dueling Banjos” Scene 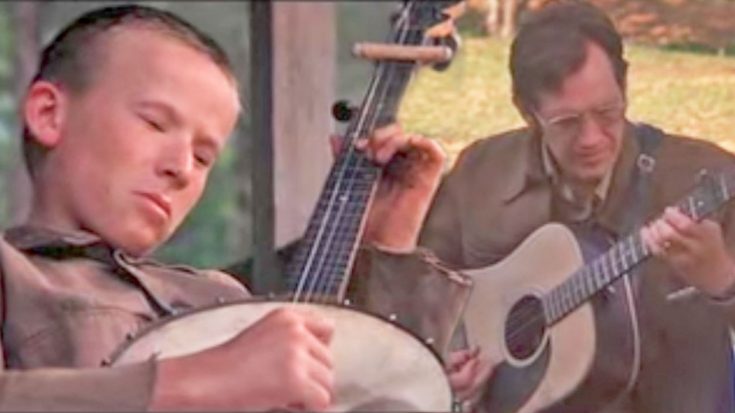 While “Dueling Banjos” was recorded by several bluegrass musicians since it was first written in 1955, it wouldn’t be the iconic song it is today without the 1972 film Deliverance.

The movie starred Jon Voight, Burt Reynolds, Ned Beatty, and Ronny Cox as four friends who set out on a canoe trip. Near the beginning of the film is the iconic “Dueling Banjos” scene, which sets the tone for what lies ahead for the four men.

The “Dueling Banjos” scene not only became one of the most well-known parts of the award-winning movie, but it also became an iconic song. According to IMDb, the very first scene shot was “Dueling Banjos” with the rest of the movie being shot almost entirely in sequence.

The scene begins with Cox’s character Drew leaning against a car, tuning his guitar. With every strum, he hears the same strum from a banjo. Looking up, he sees Lonnie, a backwoods boy played by actor Billy Redden, with a banjo in hand.

They begin to play a call and answer type melody, with each testing the other’s skill on their instrument before kickstarting into a full-fledged, high energy battle. Their interaction receives smiles from the cast members, with some even beginning to dance and whistle along.

Both Lonnie and Drew have huge smiles on their faces by the end of the performance, and so do we!

Some movie magic was used to put this scene together. The director didn’t think Redden was good enough to pull off even looking like he could play this banjo part, so a skilled banjo player’s arms and hands were used. He is behind the actor and the director used different camera angles to make sure he wouldn’t get in the shot!

Watch the iconic scene from Deliverance below.