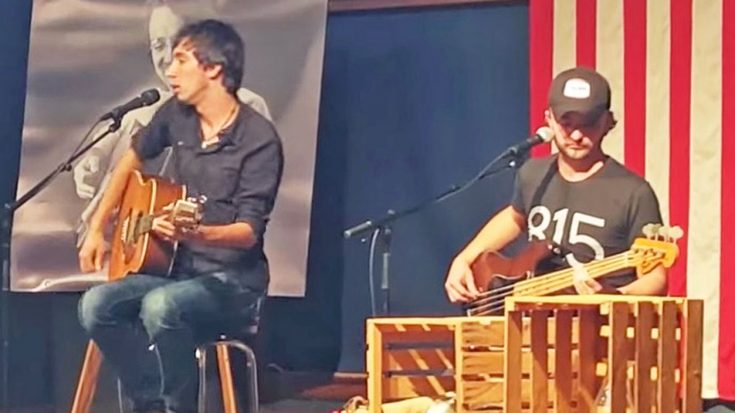 For Mo Pitney, family is everything. He never shies from sharing the spotlight with his family members, and often invites his brother and sister to perform with him.

His brother, Blake, and his sister, Holly, recently joined him for a special performance in Rockford, Illinois. The reason the performance was so special is because it was in honor of one of their own family members.

In June 2005 Mo, Blake, and Holly’s uncle Perry Pitney was killed when he was involved in a one-vehicle crash near the Rockford airport. Perry was a beloved member of the community, and served as the Executive Director of the Rockford Rescue Mission, which had been co-founded by his father, Rev. Gerald Pitney.

To honor Perry’s life and legacy, the Pitney family started the Perry Pitney Memorial Festival. The annual memorial concert serves as a fundraiser for the Rockford Rescue Mission.

In 2017, Mo served as the headliner of the event, with his cousin and Perry’s son Luke being billed as a special guest. Following the event, Luke took to social media to thank everyone involved in making it a success. “It left me speechless and was one of the most amazing experiences I’ve ever been fortunate enough to take part in,” he wrote.”

I'm happy to announce that we raised over $15,000 for the homeless and hurting in our community last Friday at the Perry Pitney Memorial Concert! I could honestly feel my Dad looking over my shoulder, (like in this picture). We had over 370 attendees in a small memorial hall and you could just feel the tremendous amount of positive vibes flowing throughout! It left me speechless and was one of the most amazing experiences I've ever been fortunate enough to take part in. Thank you for all who showed up, ready to love and share life with each other and support The Rockford Rescue Mission and our community!! #music #life #hope #community #love

The Pitney siblings delivered a particularly beautiful performance of the song during their tribute to their Uncle Perry. Holly didn’t sing, but still remained on the stage while Mo sang and Blake played guitar.

“If We Make it Through December” is a song that translates best when it’s performed from the heart. We’d say that Mo and his brother poured plenty of heart into their rendition of the song. Now you can hear it by tuning in to the video below.

We’re sure that Perry would be so proud of all of them.