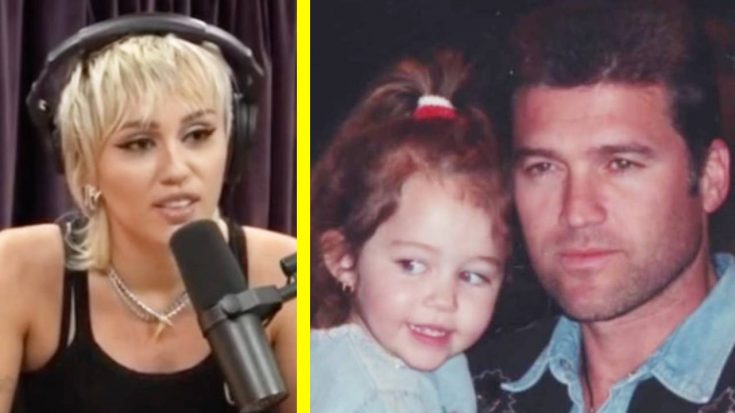 Recently, Miley Cyrus was a guest on one of the most popular podcasts in the country, the Joe Rogan Experience, and she was an open book, to say the least!

Today on the podcast – the great and powerful @mileycyrus! I had a great time talking to her and wearing @davidchoe’s shirt! Available today on @Spotify and everywhere podcasts are played. Enjoy!

Her two-hour conversation with host Joe Rogan covered topics including drug use, music, relationships, family, and every thing in between. She did reveal something that not even the biggest Miley or Billy Ray Cyrus fan would have known.

Tomorrow! #BrightMinded 11:40 AM – 12 PM PT live on IG with @mileycyrus! @tishcyrus and @noahcyrus will be guests too! It’s gonna be a good time y’all!

When she was just two years old, her dad put her in a baby backpack and jumped on his dirt bike. Billy Ray approached a low hanging branch and ducked, but his toddler didn’t and it caused a significant injury.

Cyrus felt safe to finally tell the story, even though she described it as “really bad,” because “[Billy Ray] can’t go to jail, I don’t think, because it’s a long enough time away.”

Miley told Joe, “He had me in a baby backpack and I was on a dirt bike with my dad. And he was riding, and a tree had fallen, and he ducked, and I didn’t, and I hit my head on the tree. It was bad. So that’s what’s wrong. Everyone’s asked me that for years.”

The head injury has impacted Miley’s life forever and has blamed it for her impulse, as well as her anxiety.

Even though she had a head injury, she doesn’t really know life before it, saying, “Maybe I’m thankful for it. It knocked me into this identity or something.”

Watch her full interview with Joe Rogan below.