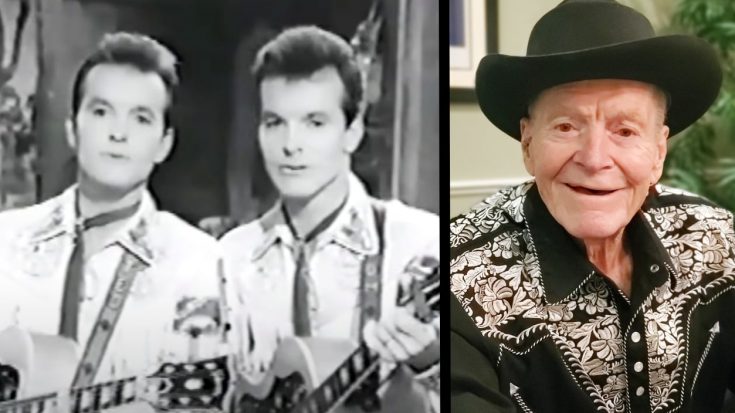 Most people think of country music as a strictly American genre. But for many decades, two brothers from Australia were known as the members of one of the most beloved country duos in the world.

Identical twin brothers Tom and Ted LeGarde formed the duo known as the LeGarde Twins. They got their start performing in Australia before moving to Canada to continue their career there.

The LeGarde Twins eventually made the move to Nashville and got the chance to debut on the Grand Ole Opry stage. Their biggest hit was released while they were in the U.S., and was titled “I Can Almost Touch the Feelin’.”

The LeGarde Twins were also known for opening the the LeGarde Twins Country Music Theatre in Conway Twitty‘s Twitty City in Hendersonville, Tennessee. After Conway died, the brothers relocated the theatre to a new location in Nashville.

Tom and Ted remained active as performers well into their later years. They had shows throughout the 2000s, including one at a festival in Franklin, North Carolina in 2008.

Sadly, we’ve now lost Tom as well. He died on July 30, 2021 at the age of 90. He passed away almost exactly three years after his twin brother.

“Hello friends and family. With great sadness and a heavy heart. Tom LeGarde has passed away peacefully in his sleep today, July 30th 2021. Please say a prayer for him his wife, Diane LeGarde and his family in this difficult time,” Matthew said.

Matthew mentioned how Tom’s twin brother Ted had passed away around the same time three years ago. “Rest assured Tom and Ted are back together again singing in heaven!” he said.

Remember both Tom and Ted by watching one of the LeGarde Twins’ old performances in the video below. May they both rest in peace.

Our hearts and prayers go out to Tom’s family during this incredibly difficult time.