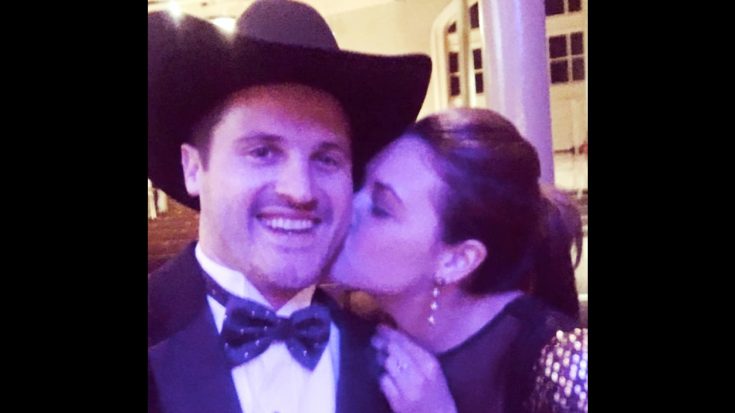 In September 2018, Alan Jackson‘s son-in-law Ben Selecman slipped and hit his head while helping people onto a boat in Florida. He was in the hospital for awhile before he passed away on September 12.

Ben married Alan’s eldest daughter, Mattie, in October 2017. They were just one month shy of celebrating their first anniversary when Ben passed away. Mattie became a widow at the age of 28.

Mattie has been incredibly open about her grief on social media and in her 2021 book, Lemons on Friday. She also co-founded the organization NaSHEville, which helps multiple groups of people, including widows.

After praying that she’d one day be able to find love again, Mattie found that love with one of her friends’ brother-in-laws, Connor. They started dating in 2021, but Mattie didn’t introduce Connor to her followers until April of this year.

The couple recently got engaged while celebrating Connor’s 30th birthday on a beach vacation. “Feeling overwhelmingly thankful, excited, and thrilled for this kind-of-surprise but so-fervently-prayed for ENGAGEMENT,” Mattie wrote on social media.

One thing Mattie loves about Connor is the fact that he “chooses and cherishes” everything that has happened to her, and will always help her honor the love she and Ben shared.

This year marked the four-year anniversary of Ben’s death. Mattie remembered Ben with a sweet tribute on social media, writing:

“It’s hard to believe it’s been 4 years since I said goodbye. Today was the picture perfect, early fall day Ben would have hand picked and loved and probably called out of work just to enjoy. It had tears and big smiles and huge praises to the God who hasn’t left my side for a second since Ben went Home to Jesus. More than anything though, I feel overwhelmingly grateful today.”

She went on to list all of the things she is grateful for, including the fact that Connor is so accepting of her past.

Mattie ended her post by writing, “Enjoy that heavenly view of a stunning fall day, Ben Selecman. Til I see you again.”

You can read Mattie’s full tribute below. May Ben rest in peace.