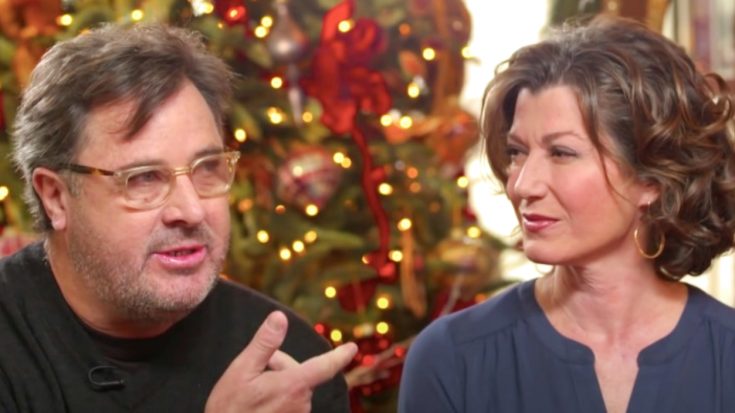 Amy Grant was riding her bicycle with a friend in late July when she suffered an accident after hitting a pothole. Her husband, Vince Gill, said Grant lost consciousness for 10-15 minutes after the accident.

Grant received treatment for her injuries at a hospital in Nashville. She was eventually released to recover at home.

Since she needs time to heal, Grant postponed all of the concerts she had scheduled for August, September, and October. One month after the accident, Grant shared a statement on social media thanking fans for their support:

“I want to say thank you to everyone who has written me a note, sent flowers or gifts, or said a prayer on my behalf,” she said. “I’m one month into a recovery that has held so many unexpected hidden gifts. On the advice of my doctors and other friends who have been through similar experiences of recovery, I am choosing to give myself the gift of a very simple fall season.”

Grant said she’s looking forward to performing again during the holiday season. She and Gill have an annual holiday residency at the Ryman, and she’s also embarking on a Christmas Tour with Michael W. Smith.

Gill was honored on Monday (September 12) during a CMT Giants ceremony in Nashville. While there, he spoke with ET‘s Brooke Anderson about how Grant’s recovery is going:

“She’s doing great,” Gill said. “She’s pretty torn up that she couldn’t be here tonight but with her accident and all of that, they kind of deemed that the best thing for her to do is just be still.”

Gill said it’s been tough on Grant to take it easy, since she enjoys being active. “That’s hard for her because she is very active,” he said. “She knows that she is well thought of, well loved and represented tonight, so it’s all good.”

He’s excited for the day Grant can get back onstage and sing with him again. But he says the best feeling is knowing “she’s ok” after her accident.

Back in August, Gill performed “When My Amy Prays” along with his and Grant’s daughter, Corrina, to honor Grant after her accident. Grant’s team shared the video of the emotional performance on her official Facebook page, and you can watch it below.

We’ll continue to pray for Grant’s quick and complete recovery.