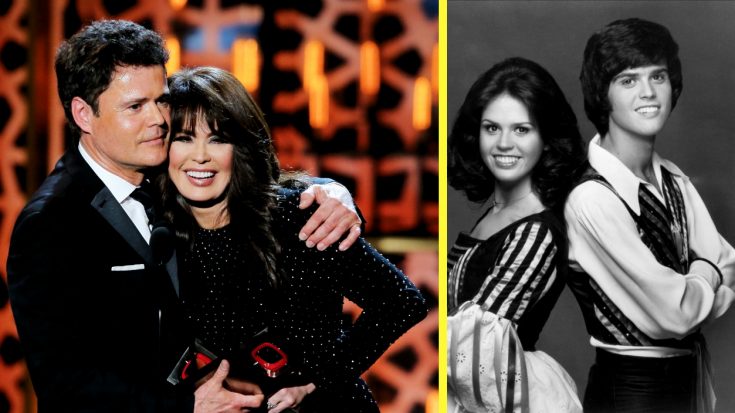 For decades and decades, these two famous siblings have dazzled us with their incredible showmanship and stunning music – but it’s time to say goodbye…

Donny & Marie Osmond are just two of the famous Osmond brood and they, along with their siblings, have found great success in show business as a group, duo, and individual performers. Most recently, though, Donny and Marie have been performing at The Flamingo in Las Vegas for a residency that was just supposed to last six weeks. That was 11 years ago.

I still (and always will) love Donny & Marie. My goal is to make it to the Flamingo to see you this year!! @donnyosmond @marieosmond @FlamingoVegas ❤️❤️❤️❤️❤️ pic.twitter.com/Tjsrmyvrnv

In a late-night appearance on the popular celebrity talk show, Watch What Happens Live, Marie opened up about how they ended up doing an 11-year residency and what is in store for their future.

The 59-year-old music superstar told host Andy Cohen that both she and Donny are on the same page for retirement..and that it’s coming much sooner than anyone thought.

“We were supposed to be there six weeks!” she said of their residency, laughing. “You know, you kind of decide 10 years and then you turn it to 11. You know, Donny’s getting old.”

Jokes aside though, she says that the two often think each year they perform is going to be the final one before they choose to retire, but that this year – the 11th – will be their final one.

“Donny has said this many years,” Marie continued. “Honestly, we are thinking this year.”

Donny & Marie have been household names since they were just kids and even had their own variety show in the 1970s before they went their separate ways and started solo careers.

Marie has had a slew of country music hits, Donny has been in Disney movies, and they both have taken a strong liking to live theater performances. It was 30 years before they reunited for this Vegas residency – and now after more than a decade together on the stage again, they are winding it down.

“We didn’t work together for 30 years,” Marie said, looking back on their past. “I had country hits, he did Broadway — different things.”

“We kind of looked at each other and went, ‘Wow you’re older.’ But we thought, ‘6 weeks, we can handle that.’ And here it is 11 years now, we’re moving into that. It’s fun! People come from all over the world, you know.”

We absolutely love their performances and can’t wait to see what they do after their residency is over, but it’s always sad to see such a fun and wonderful show come to an end.

UPDATE: As of April 2019, the two have officially decided to end their Las Vegas residency.

Watch Marie Osmond’s full interview with Andy Cohen below and tell us if you’ll be getting tickets to some of their remaining shows in the comments!