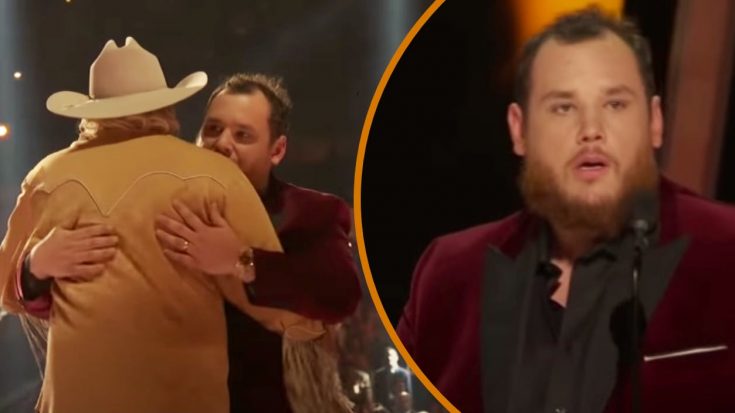 On Wednesday, November 10, 2021, Luke Combs was named the Entertainer of the Year at the CMA Awards. This was Combs’ first time winning the award…which is the most prestigious one the CMA has to offer.

The new Entertainer of the Year was understandably shocked when presenter Alan Jackson read his name as the winner of the award. Combs kissed his wife Nicole before making his way on stage.

Jackson greeted Combs with a handshake and a hug before stepping aside to let him deliver his acceptance speech. The “Remember When” singer knows what it’s like to be in that position, because he has won the award three times himself.

Combs said he was “at a loss for words,” as he tried to collect his thoughts. As honored as he was to have won Entertainer of the Year, he was also freaking out about being in the presence of Jackson.

.@lukecombs wins the final award of the night – Entertainer of the Year! #cmaawards pic.twitter.com/A9Jlr4q16g

“I honestly don’t know what to say,” Combs continued. He didn’t have a prepared speech, “Which is not serving me very well right now,” he joked.

With tears in his eyes, Combs went on to thank his fans and the other artists in the room. He then took a moment to recognize his fellow nominees and all who had been nominated for Entertainer of the Year in the past:

“Every single person that was nominated for this award, this year and every year before, deserves to win this. I don’t deserve to win it, but I’m sure as h— glad that I did.”

You can watch Combs’ acceptance speech in the video below. It’s clear he was touched to receive the award…and to receive it from Jackson of all people!