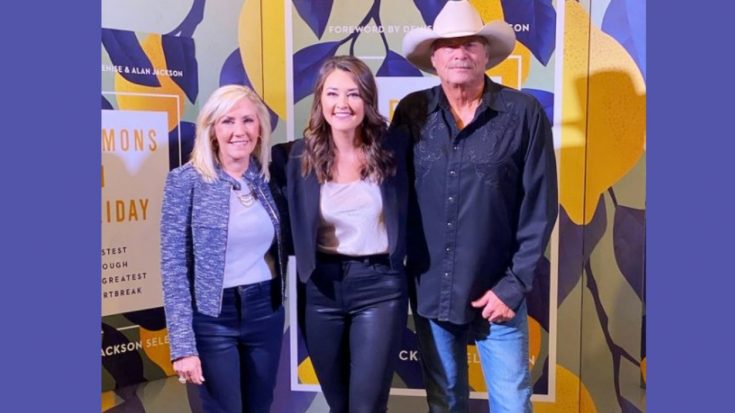 Alan Jackson‘s eldest daughter, Mattie, suffered an unimaginable loss in 2018. Her husband, Ben Selecman, died after he slipped and hit his head while on a boat in Florida.

Ben was in the hospital for several days before he passed away. He and Mattie had been married for less than a year at the time of his death.

After Ben died, Mattie began journaling as a way to process her grief. She studied Creative Writing in college, so it was only natural for her to write about her feelings.

Although she didn’t know it at the time, those journal entries served as the foundation of her first book…Lemons on Friday:

“It was never my intention [to write a book],” she told Yahoo! Life‘s The Unwind. “The way I knew how to process sudden tragedy and grief was to write. It’s a passion of mine anyway, but there was more permission to be more honest on paper than with myself and the people around me.”

As she explained in a post on Instagram, Lemons on Friday “charts [her] pain and struggles,” after Ben’s death.

Mattie teamed up with her dad to write a song that accompanies the book. Alan recorded the song, which is titled “Racing the Dark.” Those who preorder Lemons on Friday can download “Racing the Dark” for free.

Alan and his wife, Denise, also wrote the foreword to Lemons on Friday.

The preorder phase for Lemons on Friday will end soon. That’s because its release date is Tuesday (November 16)!

Mattie held a party to celebrate Lemons on Friday‘s then-pending release. Her parents were on hand to support her. Her younger sisters, Ali and Dani, also attended the party.

The eldest Jackson daughter gushed about the special night on Instagram. She thanked all her loved ones who made this dream of hers a reality.

“Thank you, my people for always believing in me, championing my every dream, and shouldering my heaviest burdens,” she wrote alongside a slideshow of photos that show her with her sisters, parents, and friends.

You can look through all of the photos Mattie shared below. We bet Alan and Denise are incredibly proud of her.