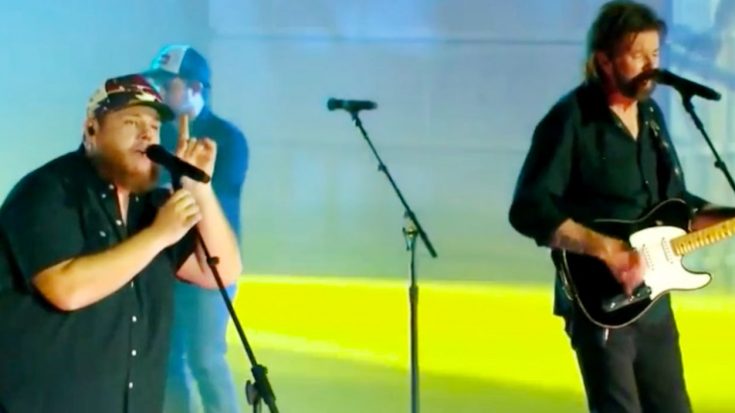 The CMT Music Awards are big on collaborations. There is a whole category dedicated to collaborative music videos, fittingly called Collaborative Video of the Year.

Collaborations are oftentimes honored as nominees in the Performance of the Year category as well. In 2020, three collaborative performances were nominated for the award.

Since CMT is the host of the ceremony, performances from its Crossroads program often earn a nod. One example of this is Luke Combs and Brooks & Dunn‘s Crossroads performance of “Brand New Man,” which was nominated for Performance of the Year at the 2020 CMT Music Awards.

Brooks & Dunn enlisted Combs to re-record “Brand New Man” with them for their 2019 album Reboot. That collaboration was the start of a friendship between the Country Music Hall of Famers and the powerhouse singer.

They later teamed up again to record the song “1, 2 Many.” The song, which was co-written by Combs, was featured on his 2019 album What You See Is What You Get.

When Combs and Brooks & Dunn took to the stage at the 2020 CMT Music Awards, it wasn’t their nominated “Brand New Man” collaboration that they performed. Instead, they sang “1, 2 Many,” and it was a rowdy good time!

Combs and Brooks & Dunn actually opened the ceremony, so they set the tone for the fun night ahead. Combs started off singing on his own before Brooks & Dunn jumped in toward the end. Kix Brooks came onstage with a beer in hand, and Combs shotgunned it on stage in an instant!

Then, Brooks & Dunn jumped in and started to sing along with Combs, bringing the performance to an epic conclusion.

Head below to check out a video of Combs’ performance with Brooks & Dunn at the CMT Music Awards. We love it when these three share the stage!