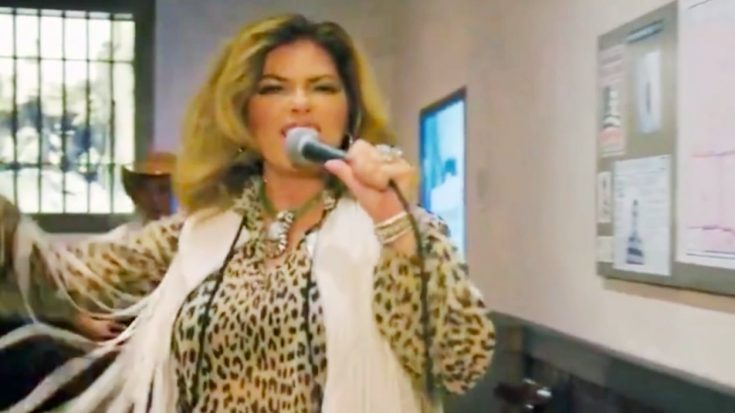 The last time Shania Twain stopped by the CMT Music Awards, which was in 2011, she helped Taylor Swift with a Thelma & Louise-style show opening.

Twain took on the role of Louise picking up Thelma (Swift) after an argument with her boyfriend and drives her straight to the shooting range. After she taught Swift how to properly aim and shoot a pistol, a man approached the two armed friends, saying he’d “like to squeeze [their] little hind ends.” Twain and Swift respond to his advances with bullets from their loaded guns.

Their exploits quickly made national news, with Donald Trump even weighing in on the matter. They crossed paths with Kenny Rogers, Chord Overstreet (son of songwriter Paul Overstreet), and a hitch-hiking Kid Rock who they inevitably drive off a cliff after he dares to change the radio station from country.

Now, nine years later, Twain returned to the awards show in a surprise move that was announced on October 13.

Twain performed her iconic hit, “Whose Bed Have Your Boots Been Under?” virtually from where she’s been staying in Switzerland.

She delivered her performance at the Chaplin’s World museum, which made for an interesting and unique backdrop. Twain even sang with life-size figurines of Charlie Chaplin dressed as characters from his various movies.

As always, Twain put on an entertaining performance that fans were delighted by. Watch it below!