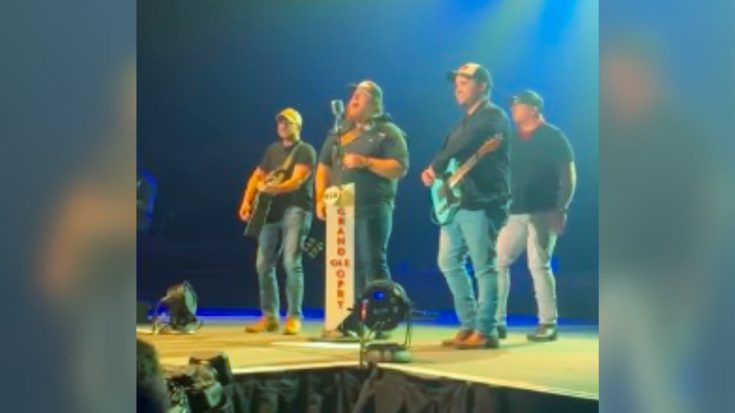 In 1913, a blind fiddle player named Dick Burnett released a six-song songbook that contained a tune titled “Farewell Song.” The song went untouched for several years until Emry Arthur, a friend of Burnett’s, decided to record it.

When Arthur released his recording, he gave the song a new title. He called it, “I Am a Man of Constant Sorrow.”

While the O Brother, Where Art Thou? version of the song is the most popular, there are many other beloved cover versions. Artists such as Waylon Jennings, Bob Dylan, Rod Stewart, Dwight Yoakam, and a cappella group Home Free have all recorded the song.

Of course, there are many other covers of “Man of Constant Sorrow” that were simply performed live instead of being recorded. We have one such cover to share with you here, and it’s one of the best.

During a show in Peoria, Illinois, country music powerhouse Luke Combs joined a few members of his band to deliver a cover of “Man of Constant Sorrow.”

Combs took command by singing lead vocals, letting his distinctly country voice roar through the song. His band members backed him up by singing harmony, and one member also accompanied them on his acoustic guitar.

In one fan-filmed clip from the concert, you can hear the crowd singing along with Combs. They were clearly getting a kick out of his rendition of the song.

You can watch Combs and his band sing “Man of Constant Sorrow” in the video below. After hearing this, we’re itching to hear a recorded version from Combs and crew…it’s that good!