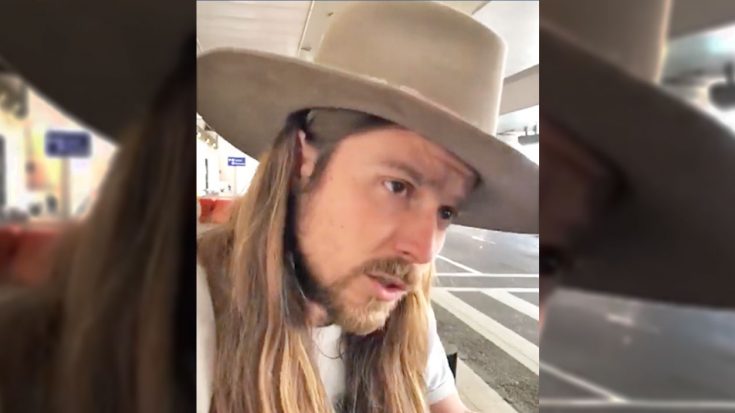 For normal, everyday folks at Los Angeles International Airport, hearing a musician play a song on his guitar on the curb might be an ordinary thing. But the musician offering up his talents in April was far from ordinary.

Dad's in #nashville SOLD OUT at the Ascend Amphitheater tonight ! I’ll be hangin around there too http://www.ascendamphitheater.com

Lukas Nelson, son of country legend Willie Nelson, was at LAX en route to Indio, California where he was set to play at Stagecoach Music Festival, one of the biggest outdoor country music festivals in the country.

It seems like he was waiting for his transportation to pick him up, so he did what he does best to pass the time – play music. Because it was his father’s 85th birthday, Lukas played one of his songs, “Bloody Mary Morning.”

Willie first released “Bloody Mary Morning” on his 1970 album Both Sides Now. It’s been said he was inspired to write the song after his struggles to become a better parent. Two years after he released the song with RCA Records, he performed “Bloody Mary Morning,” as well as other songs he wanted to include on a future compilation album, at a party in Nashville.

Willie impressed a partygoer who just happened to be the vice president of Atlantic Records, who offered him a record deal on the spot. Willie took the deal, seeing as he had little success with RCA Records. He then released the song on his concept album Phases and Stages and changed the theme of the song. This version peaked at number 17 on the Country Singles chart in 1974.

One more to ring in 2019. Spinning Willie Nelson – Phases and Stages (Atlantic 1974). It’s gonna be a bloody mary morning.

Special Tribute For A Special Man

Sharing the video to Facebook, Lukas captioned the photo, “I would like to wish a very happy 85th birthday to my dad, Willie Nelson with this special LAX rendition of “Bloody Mary Morning” as we head down to Stagecoach Festival for our Sunday set.”

Lukas sounds so much like his father in this impromptu performance, and the most puzzling thing about the video is that people are just continuing to drive past him, not knowing they are being treated to the sweet sounds of country royalty!