12-Year-Old Ronnie Milsap Fan Gets Surprise Of A Lifetime 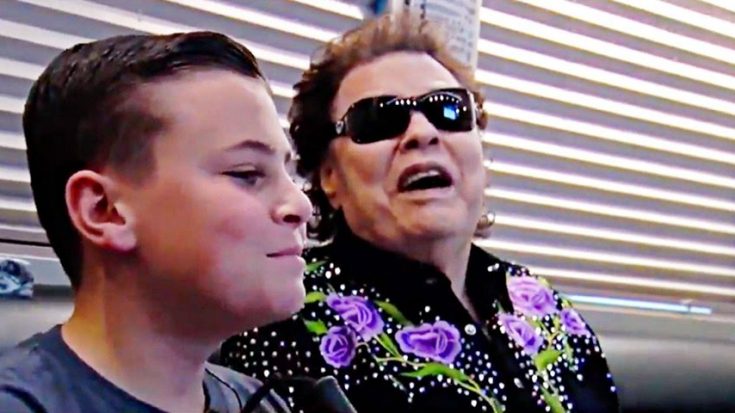 While some pre-teens go to concerts to see the performers, others attend to listen, to absorb the music, the vocals and the energy. Anthony Ingram is one such person.

The 12-year-old was excited about getting to listen to one of his favorite entertainers of all time, country star Ronnie Milsap, who was in concert at the Fox Theater in Bakersfield, California. Anthony said he’s always admired the country artist because even though he’s blind, he’s also very successful.

Anthony knew he was in for an incredible evening. What he didn’t realize was he would be climbing aboard the tour bus to meet his music idol face-to-face.

Surprise Of A Lifetime

As his mother escorted him onto the tour bus, Anthony was informed he was about to meet his music idol. Smiling from  ear-to-ear, he was introduced to Milsap.

Side-by-side, it was obvious Anthony and Milsap were miles apart in age. It was also obvious they are more alike than they are different. Both are legally blind. Both are determined not to let blindness stop them from pursuing their dreams.

Milsap, who has been blind since birth because of a congenital disorder, has won six Grammys and recorded 40 number one hits. He was inducted into the Country Music Hall of Fame in 2014.

Like Milsap, Anthony plays the piano. He also surfs, participates in martial arts and rock climbing. Each finding success in his own way, both are driven and refuse to use their blindness as an excuse not to excel.

The Sky Really Is The Limit

Before Anthony left the bus to attend the concert, Milsap shared some sage advice. The gist of it was, don’t let others tell you what you can or cannot do. Despite being blind, the sky really is the limit.

Sit back and watch this video and the instant friendship between the singer and his biggest fan. We’d love to hear your reaction. Share your thoughts below.

COMMON BOND: Country star Ronnie Milsap and 12-year-old Anthony Ingram have a lot in common: they don't let being blind stand in their way of following their dreams! 23ABC was on Milsap's tour bus when Anthony was surprised with a one-on-one meet and greet with his idol.