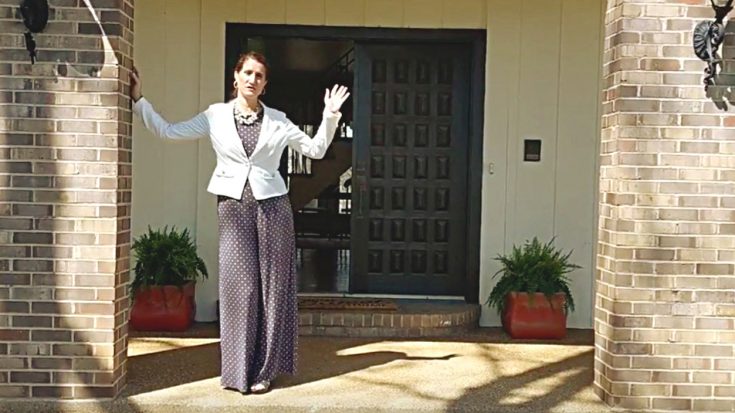 It’s natural for everyday folks to be a bit curious about the lives of the rich and famous. One major source of curiosity always seems to be celebrity homes. Do they live in the extreme luxury they can certainly afford? Or do they opt for a more humble dwelling?

Country stars’ homes are certainly intriguing. Every now and then, a more modern artist will place their home on the market and fans finally get the chance to see inside.

In some cases, fans even get the chance to peek into the homes owned by long-gone country legends. When the new owners want to sell the home, a big marketing point is to say it was once owned by a famous country singer.

Now, you can finally take a look inside a home that was once owned by one of classic country’s brightest stars…Marty Robbins. But beyond being a country singer and songwriter, Robbins was also an actor and race car driver.

Thanks to his many careers, Robbins was certainly able to afford a luxurious home. But as you step inside the front door of 4276 Pate Road in Franklin, Tennessee, you may be surprised to see just how humble his living situation was.

Of course, the house is fairly large, with a total of five bedrooms and 4,582 square feet. But if you know anything about other country stars’ homes, you know that’s actually a pretty modest house!

According to The Tennessean, the home was built in the early 1970s in Brentwood, but was actually moved to Franklin later in the decade. Apparently, the land the house was originally built on had some issues.

Robbins, who was the home’s first owner, lived in it before it was moved to its Franklin location. The new five-acre estate contains a barn and a recording studio, while a pool was built in more recent years.

The “El Paso” singer made no effort to go over-the-top with the home’s decor. A peek inside will reveal simple wood accents and furnishings. In fact, any of the more luxurious aspects of the home seem to be newer, and added in after Robbins would have lived there.

But the house’s humble appearance isn’t the only thing about it that will surprise you. As you’re likely well-aware, many times country stars’ homes end up being listed for millions of dollars.

While Robbins’ former home is still pricey, it comes in at under a million. That’s practically unheard of for a celebrity home!

So how much would Robbins’ gorgeous Tennessee estate cost you? According to its listing on RealTracs, it can be all yours for the price of $875,000.

If you’d like to take a look inside Robbins’ former home, you can do so by checking out the photos below and be sure to check out the full real estate listing here.

Once you’re done, let us know what you think of Robbins’ home. Would you like to live there?