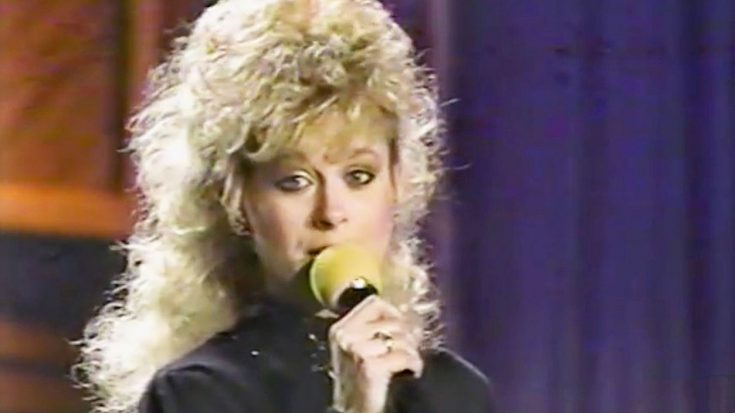 Patsy Cline‘s “Walkin’ After Midnight” may be a song about heartache, but it’s a far cry from most songs with the same theme.

Instead, Cline brought a little bit of sassiness to the track, which is perhaps why it stands out in the sea of other country heartbreak songs.

It’s that same sense of sassiness that Lorrie Morgan brought forth when she performed “Walkin’ After Midnight” some time ago.

Early in her career, country fans could catch Morgan as a regular performer on the TNN show Nashville Now. The show functioned much like The Tonight Show, but placed its focus on country music more than anything else.

Morgan was a regular on Nashville Now for a total of two years, and delivered some memorable performances during that time.

One such performance featured her version of “Walkin’ After Midnight,” in which she successfully captured Cline’s signature spunk.

Wearing a knee-length black dress and a pair of matching heels, Morgan made quite an entrance as she made her way out on the stage. With a huge smile on her face, she grabbed a microphone from a trumpeter, who had teamed up with a saxophone player to form an arch for her with their instruments.

Morgan confidently walked to the front of the stage as she started singing, ensuring that the crowd was hooked on her performance from the start. But that’s not the only reason why the crowd likely found Morgan’s performance to be enchanting.

Just like Cline did all those years ago, Morgan brought some serious attitude to her performance, which give it an irresistible quality.

You’ll see what we mean once you watch Morgan sing “Walkin’ After Midnight” in the video we’ve included below. Whenever a talented singer such as Morgan covers someone as legendary as Cline, you know it’s gonna be good!