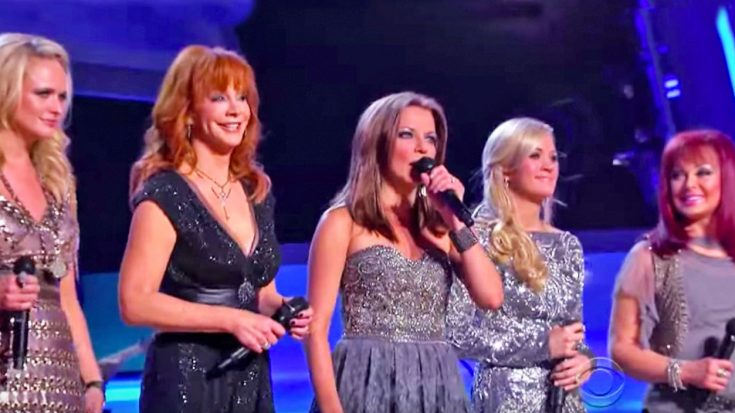 Reba McEntire, Miranda Lambert, Martina McBride, Carrie Underwood, Jennifer Nettles, and the Judds joined forces to honor the woman who paved the way for all of their careers: The First Lady of Country Music, Loretta Lynn.

At the 2011 “ACM Girls Night Out: Superstar Women of Country” television special, the leading ladies of country music banded together  for an unforgettable performance of Lynn’s iconic “Coal Miner’s Daughter.”

Or a touch of all three!

Posted by Loretta Lynn Official on Friday, May 4, 2018

Each of the seven ladies had their own moment to shine, sharing the stage and lyrics of the autobiographical hit equally.

“None of us would be doing what we do if she hadn’t done it first,” said McBride. “It’s no wonder the first lady of country music is Loretta Lynn.”

While Lynn was forced to miss out on the monumental performance due to knee surgery, she expressed her gratitude towards them via a pre-recorded video played beforehand.

Lynn is historically documented as the academy’s sole female artist of that decade and a trailblazer for the women of country music at large.

The collaboration of “Coal Miner’s Daughter” was the perfect way to honor such a legend as Loretta Lynn. You can watch their performance in the video below and be sure to let us know what you think in the comments below!