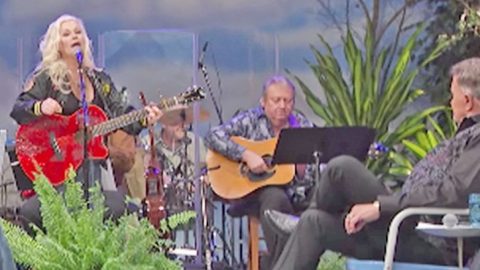 You may know the song “A Picture of Me (Without You)” as a huge success for quite possibly the greatest country singer that ever lived, George Jones.

But did you know it was also a huge success for Lorrie Morgan?

She released her version in 1991 off her album Something in Red and took it to No. 9 on the Billboard Hot Country Singles & Tracks chart. Shortly after her cover version took off, she and Jones teamed up to sing the song together, and it was magnificent.

“Picture of Me” was written by Norro Wilson and George Richey specifically for George Jones. When pitching him the song, Wilson imitated Jones’s singing style to show how they imagined it being sung.

Morgan’s version has stood the test of time, as she just recently performed it standing in front of legends including Randy Travis, Bill Anderson, and Ricky Skaggs, as well as Larry Gatlin, John Rich, Rory Feek, The Malpass Brothers, Rhonda Vincent and Glen Campbell’s daughter Ashley.

The emotional performance garnered immediate applause from the audience, who were in awe by her incredible talent. Watch her performance of “A Picture of Me” below.