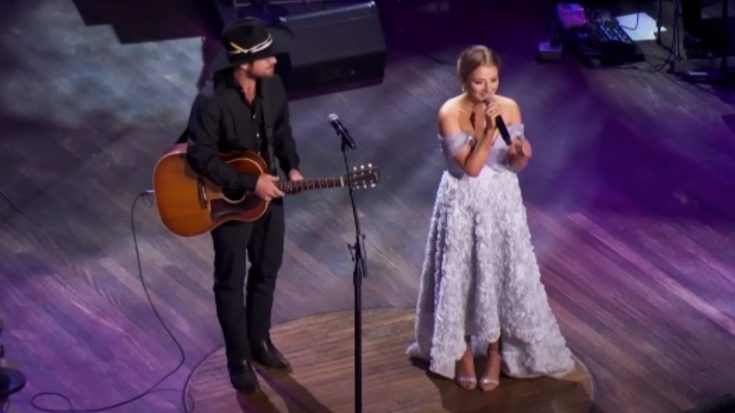 Country artists and fans gathered at the Grand Ole Opry house in Nashville on October 30 to honor Loretta Lynn during a memorial service/celebration of life. The service included performances from some of Loretta’s dearest friends, including Tanya Tucker, Alan Jackson, and Keith Urban.

One of the most meaningful performances was delivered by Loretta’s granddaughter, Emmy Russell. She sang with Willie Nelson‘s son, Lukas Nelson. They performed Loretta and Willie’s 2016 duet “Lay Me Down.” The song was written by Loretta’s son-in-law Mark Marchetti.

The service was broadcast live on CMT, so many people got the chance to see Emmy and Lukas’ emotional performance. Viewers praised the pair’s rendition of “Lay Me Down,” and also complimented the beautiful dress Emmy wore for the performance.

As the Lynn family later explained in a post on Loretta’s Facebook page, Emmy’s dress had a special meaning behind it:

“Emmy wore a lilac dress with roses to reflect a favorite color of Loretta’s and that Loretta always called her ‘Emmy Rose.'”

The Lynn family also said that Emmy and Lukas’ performance during the memorial “was one of the most special moments of the night” for them. You can watch that special moment in the video below.

If you didn’t get the chance to watch the full service on CMT live, it’s being rebroadcast twice in the coming days. You can watch it on Wednesday, November 2 at 8 PM ET or on Sunday, November 6 at 11 AM ET.