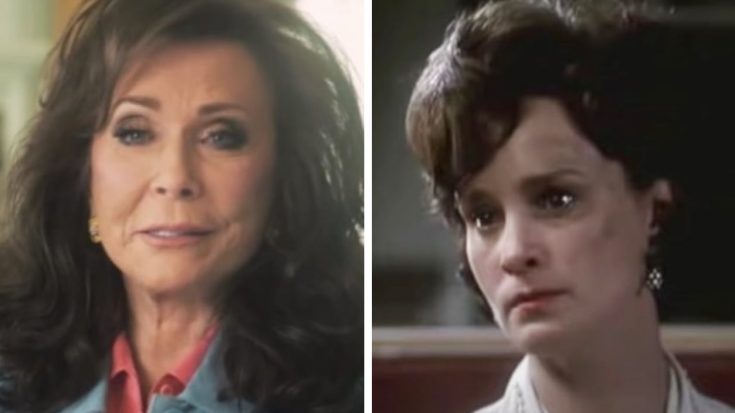 Patsy Cline blazed a trail for all female country artists who followed in her footsteps. But rather than being passive and just letting her music influence her fellow artists, Cline took an active role in shaping at least one singer who later went on to become a legendary figure herself.

Cline was already experienced in the industry when a young Loretta Lynn first came on the scene. The veteran performer took Lynn under her wing, and helped guide her through the earliest stages of her career.

The two developed a strong friendship. Cline even helped Lynn shave her legs and gave her some of her old clothes that she no longer wore.

In one interview, Lynn recalled how Cline once gave her a pair of panties, and she said they were “the best panties” she had ever seen.

So how did these two iconic country singing women go on to become such good friends?

How Their Friendship Started

Lynn got the chance to perform on Ernest Tubb‘s Midnight Jamboree radio show, and sang Cline’s “I Fall to Pieces” in her honor, since she was recovering from a recent accident. She heard Lynn’s performance and expressed that she’d like to meet her.

The duo’s first meeting was replicated in the 1980 biopic about Lynn’s life, Coal Miner’s Daughter. Lynn was played by Sissy Spacek (who won an Oscar for her performance) and Cline was portrayed by Beverly D’Angelo.

Sissy Spacek as Loretta Lynn and Beverly D'Angelo as Patsy Cline, do all their own singing in the excellent biography COAL MINER'S DAUGHTER.

The film shows how the two developed their friendship through time, and also shows Lynn’s devastated reaction when she learned Cline lost her life in a plane crash in 1963. She went on to name one of her twin daughters Patsy, and also recorded a tribute album of her songs in the 1970s.

While we see Cline and Lynn’s friendship play out from beginning to end in Coal Miner’s Daughter, their relationship was handled differently when Cline earned a biopic of her own.

Patsy Gets A Movie

Titled Sweet Dreams, the movie was released in 1985, just five years after Coal Miner’s Daughter. It starred Jessica Lange as Cline, and she earned immense praise for her performance.

Even though Coal Miner’s Daughter cast someone to play Cline, Sweet Dreams did not cast an actress to portray Lynn. Cline’s best friend is nowhere to be seen in the entire film.

But why is that? After all, the two played such a pivotal role in each other’s lives. Why would the filmmakers decide to ignore Lynn when Coal Miner’s Daughter spent time focusing on her friendship with Cline?

That’s where the key lies.

Why Did They Leave Out Loretta?

It turns out that the two films shared the same producer, Bernard Schwartz. So by the time he started work on Sweet Dreams, he had already overseen the portrayal of Lynn and Cline’s friendship in Coal Miner’s Daughter.

According to IMDb, references to Lynn appeared in original editions of the Sweet Dreams script. But Schwartz and the rest of his team eventually decided to remove all mentions of her from the film.

Well, after working on Coal Miner’s Daughter, Schwartz believed that Lynn and Cline’s friendship had already been thoroughly explored in that film. He felt that it would be best to leave Lynn out of Sweet Dreams so they could focus on other aspects of Cline’s life instead.

Had no idea about this “Sweet Dreams” movie until I saw some memorabilia from it in Patsy Cline museum yesterday. Just watched, and oh my—Jessica Lange as Patsy Cline is so amazing.

While Sweet Dreams certainly paints a picture of Cline’s life, viewers were quick to notice Lynn’s absence. We’re sure you picked up on it yourself, and likely always wondered why she was left out of the film.

Now you have your answer. It came down to the simple fact that the filmmakers felt their friendship was already explained perfectly in Coal Miner’s Daughter.

But as good as that film is at portraying how close Lynn and Cline were, no one captures the strength of their friendship better than Lynn herself. You can listen to her talk about her beloved best friend in the video below.

Cline found a lifelong friend in Lynn, one who has always made sure that she will never be forgotten.