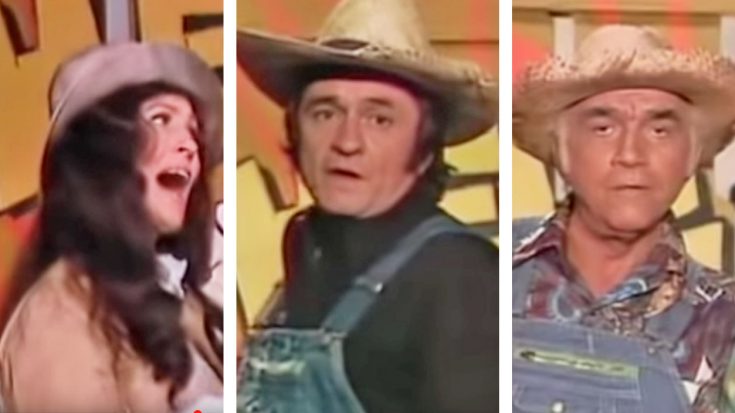 For one incredible Hee Haw special, the cast brought together some of country music’s greatest for a sing-a-long of a lifetime. Of course, it wouldn’t be a Hee Haw skit without endless laughter and ridiculous jokes and luckily country artists have quite the sense of humor.

While singing along to the tune of “Pfft You Were Gone” – a Hee Haw original – we see a silly side of country music legends we’ve never seen before. Hope you’re prepared for a couple good laughs!

One of Hee Haw‘s most beloved cast members, Archie Campbell was known for singing his hit, “Pfft You Were Gone” alongside visiting guests on the show. In his usual straw hat and overalls, he amused the audience with his hysterical ways. On the special, Campbell explains,

“After a few years, we decided to bring in our guests and have a little fun with ‘Pfft You Were Gone’ too. We have a film clip of some of the stars who have appeared with us and some of ’em are gonna really surprise you. So, you watch closely.”

A Series Of Legends

Lorne Greene made his hilarious appearance singing the tune even though his specialty was definitely acting! It wasn’t long before country legends like Loretta Lynn and Tammy Wynette were making their debut.

The four-minute long clip shows an array of country artists “pfft-ing” in each other’s faces followed by mischievous smiles.

Toward the end of the clip, we see Johnny Cash and Campbell singing back to back. As Cash starts to sing solo, Campbell’s eyes get real big. Next thing you know – the music legend was throwing a pie in Campbell’s face just in time for his “pfft, you were gone” line.

Posted by Our Nostalgic Memories on Thursday, November 7, 2013

They truly just don’t make TV like they used to!

Watch the hysterical Hee Haw clips below – you might even see your favorite country star!