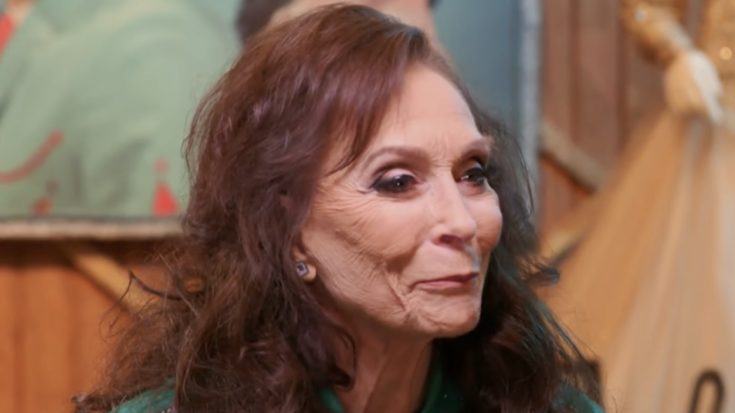 In early 2017, country legend Loretta Lynn was readying a brand-new album titled Wouldn’t It Be Great. Unfortunately for fans, she pushed back the release date after suffering a stroke in May 2017. She felt that if she released the album while she was still recovering, she wouldn’t be able to do her work justice.

She also cancelled a nationwide tour supporting the album and her recovery was going extremely well until January 2018, when she fell down and broke her hip. Lynn’s sister, Crystal Gayle, revealed this news to her fans via a Facebook post.

“My birthday wish is for everyone to send love and prayers to my sister, Loretta Lynn, who fell and broke her hip last week,” Gayle wrote. “I was with Loretta yesterday. She is in good spirits as well as can be expected with this type of injury.”

Hard to believe today marks 1 year since I’ve become a member of the @Opry Such an honor! ❤️?❤️

After a 13 month delay, the 86-year-old star released the album to incredible fanfare on September 28.

“This new record means so much to me, but this last year I had to focus on my health and I decided to hold up the release,” Lynn said in a statement. “ It’s been a tough year, but I’m feelin’ good and look forward to it comin’ out. It was really important to me to be a part of it being released and I’m excited to celebrate with all y’all!”

Wouldn’t It Be Great – Out September 28

Before my stroke last year I had been working hard on a new album and was so excited about it. This new record means so much to me, but this last year I had to focus on my health and decided to hold up the release. It’s been a tough year, but I’m feelin’ good now and look forward to it comin’ out. It was really important to me to be a part of it being released and I’m excited to celebrate it with all y’all. I hope you love it and I hope you'll help me tell everybody about it! Take a listen to the first song, “Wouldn’t It Be Great?” and get ready for the album comin’ on September 28! https://lorettalynn.lnk.to/WIBG_video

While she has done a couple interviews with CMT.com and PEOPLE Magazine, she has yet to partake in a televised interview since her stroke in 2017 – until now, that is.

Chatting with Jenna Bush Hager from The Today Show, Lynn opened up about her new music, her family, and much more.

I love getting to be on the Today Show with sweet Jenna Bush Hager. You can catch my interview tomorrow! Don’t forget to tune in bright and early at 7:30 am CST / 8:30 EST. Love y'all

When talking about her health, the “Coal Miner’s Daughter” singer revealed, “I feel great. I feel so good, that I’m ashamed I feel so good!”

Lynn, who writes all of her own music, also spilled why this album is so special to her –  it includes the last song she ever sang to her husband before he passed away. She also noted that songwriting is more important to her than singing, because that’s how she tells her life stories.

Lynn spoke about the greatest joys in her life – her children – and about her upbringing. Hager asked her, “What do you think [your father] would think of you, of your life, this extraordinary life?”

“I’d give anything in the world if he would have been here when I recorded ‘Coal Miner’s Daughter.’ But I think he hears me, and one day, I will sing it to him,” she said with tears welling in her eyes.

Throughout the interview, she just starts singing – and it’s in those moments that you realize why she’s a legend.