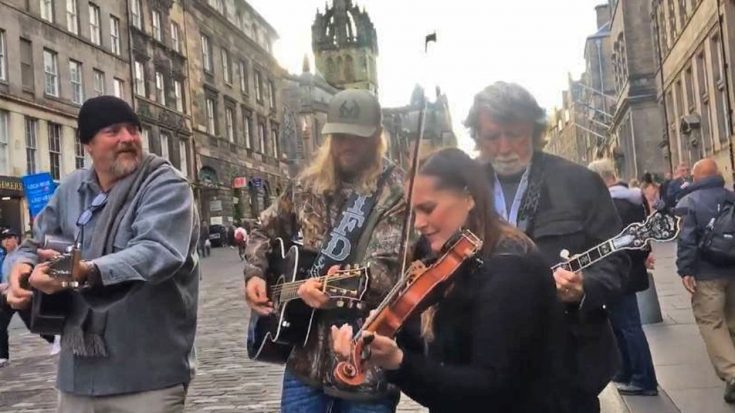 It’s safe to say talent runs in the Cash family. One Cash prodigy, in particular, was spotted on the streets of Scotland Wednesday afternoon performing an incredible rendition of “Will the Circle be Unbroken.”

John Carter Cash is the only child of Johnny and June Cash. The legendary couple is said to had lived one of the world’s greatest love stories. The duo mentioned John Carter in their recordings on several occasions. In 1972, “I Got a Boy (And His Name is John)” was written by his parents in direct reference to him. John Carter even made the cover of his father’s album Look at Them Beans, followed by duets and records his father and him did together.

John Carter grew up in the music world from the second he was born but he started music production in the late 90s. He worked with both his mother and father to produce award-winning albums. Since then, John Carter has gone on to work with artists such as Loretta Lynn, George Jones, and Willie Nelson. He is now the owner of Cash Cabin Enterprises, LLC., where he produces his music in the same studio that his father once recorded.

John Carter mirrored his father by playing one of his classics for bystanders. John Carter, in a beanie with a guitar in hand, starts off the song with the help from some of his buddies. The crew plays as John Carter sings the first verse. Once the chorus comes along, the whole group merges together to sing in unison. Following the violin solo, John Carter pulls his wife in, Ana Christina Cash to sing. Her heavenly vocal range was a breathtaking twist to the classic song.

This wouldn’t be the first time John Carter covered this tune though. In 1994, John Carter was invited on stage to sing the song with Johnny and June. The family put on a beautiful performance yet again reminding the world of their talent.

Watch as John Carter and friends serenade the streets of Scotland!