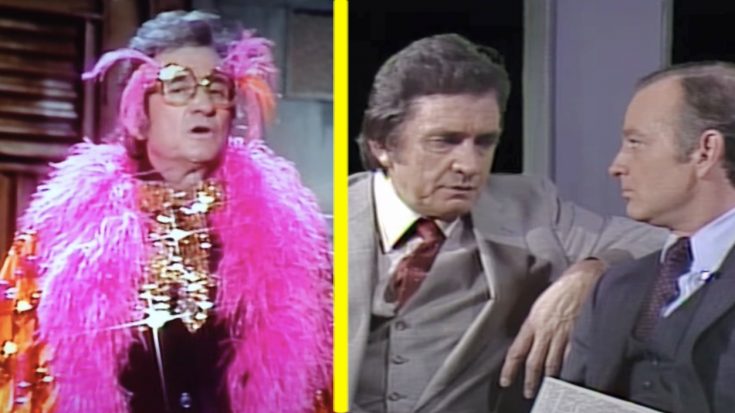 On April 17, 1982, the legendary Johnny Cash hosted Saturday Night Live. He had already accomplished so much in his own industry, just years prior becoming the youngest inductee into the Country Music Hall of Fame.

On this day in 1980, Johnny Cash was inducted into the Country Music Awards Hall of Fame by Kenny Rogers. pic.twitter.com/htepLMVbhw

When he host SNL, he was not the musical guest, but he did show off his musical skills in his monologue, playing renditions of “I Walk the Line,” “Folsom Prison Blues,” “Ring of Fire,” “Sunday Mornin’ Comin’ Down” and “Man in Black.” You can watch his monologue here.

He took part in several sketches, including one that was a commercial of sorts for Tegrim, a dandruff shampoo. A woman was told by her friend that she has a dandruff problem and the perfect dandruff test is to shake her head over Johnny Cash, who is always in black.

Another favorite sketch he was in is called “The Train Depot,” where he plays a train-goer who has a way with words.

But the thing that stole the show was the second time he introduced Elton John while wearing something Elton would wear – a feathery pink jacket, gold chains, and gold glasses with pink feathers.

But, that actually wasn’t the only time he was on SNL. While he was in the audience in 1985 with his wife June Carter Cash, Waylon Jennings, and Jessi Colter, Billy Crystal was playing one of his characters, an insult comic. The producer told him there would be some famous people in the audience so it would be fun for him to go around and roast them. Crystal prefaced this by telling everyone there was no script and this was all improvised.

Watch that clip below.