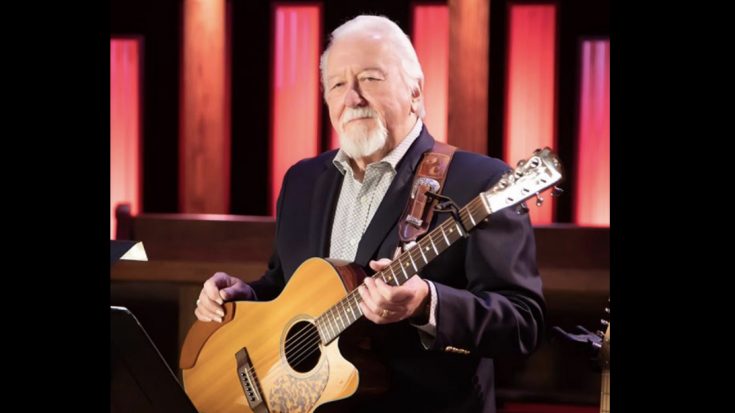 Legendary Nashville guitarist Jimmy Capps, also known as “The Sheriff,” passed away Monday night at the age of 81.

News of his passing came through social media posts from many of his Music City friends including the Oak Ridge Boys who wrote, “We lost a dear friend last night…legendary guitarist Jimmy Capps went home…this is another loss that is so hard to process…the heavenly choir has gained one of the finest players to ever play…and quite frankly one of the finest men to ever live.”

We lost a dear friend last night … legendary guitarist Jimmy Capps went home … this is another loss that is so hard to process … the heavenly choir has gained one of the finest players to ever play … and quite frankly one of the finest men to ever live #JIMMYCAPPS pic.twitter.com/OHkWvuZGpB

Jimmy Capps was born in North Carolina in 1939 and started playing guitar for the Louvin Brothers when he was only 19. In the early ’60s he became a guitarist for the Grand Ole Opry.

“When I was a little boy, I would lie in my bed and dream about being on the Grand Ole Opry,” he wrote in his book The Man In Back: Jimmy Capps, The Autobiography. “There was no way I could ever have imagined that I would actually go on to play on that stage more times than anyone else in the history of the Opry.”

Capps was also in high demand as a studio musician. At one time, the musician was recording more than 500 studio sessions a year. Some of country music’s greatest hits featured Capps’ talent, including: “The Gambler” (Kenny Rogers) ,”How Blue” (Reba McEntire) , “Near You” (George Jones and Tammy Wynette), “After All These Years” (Barbara Mandrell), Charley Pride’s “Honky Tonk Blues,” The Louvin Brothers’ “How’s The World Treating You.”

Jimmy Capps can also be heard on George Strait’s “Amarillo By Morninh,” Alan Jackson’s “Here In The Real World,” The Oak Ridge Boys’ “Elvira,” Barbara Mandrell’s “I Was Country When Country Wasn’t Cool,” and numerous other hits by John Denver, Conway Twitty, Ronnie Milsap and more.

A whole new generation of country music fans fell in love with Jimmy Capps as “The Sheriff” on RFD-TV’s Larry’s Country Diner.

In 2014, Capps was inducted into the Musicians Hall Of Fame and the North Carolina Music Hall Of Fame, and in 2012 was honored as a “Nashville Cat” by the Country Music Hall Of Fame. The Tennessee Senate passed a Joint Resolution in 2015 proclaiming Capps’ contributions to the music industry, and Tennessee governor Bill Haslam named him “Goodwill Ambassador” in 2015. Capps was also honored with many of NARAS’ “Super Picker Awards,” including “Most Valuable Acoustic Player.”

Jimmy Capps is survived by his wife Michele and three sons. Our thoughts and prayers are with his family and friends during this difficult time.