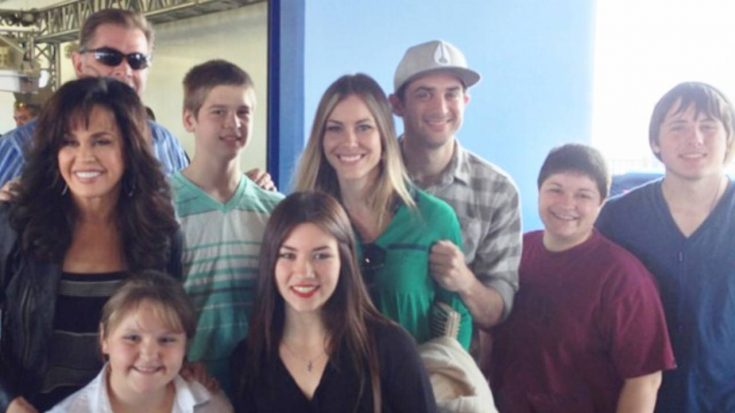 In the 1960s, the world was introduced to Marie Osmond. When she was just four years old, she made her debut on The Andy Williams Show as part of her brothers’ act, The Osmond Brothers, in 1964.

The only girl in a family of nine siblings, Marie definitely made a mark on show business and signed to MGM/Kobel Records, making many concert appearances alongside her brothers. Her musical style was more country than pop. In 1973, Osmond released with her single, “Paper Roses,” which went to number one on the charts just one week after she turned 14.

Marie continued to release music, star on Broadway, as well as host her own variety show with her brother Donny, for the next few decades. In 2007, Donny and Marie signed on for a six-week Las Vegas residency at the Flamingo Hotel, which ended up turning into an eleven-year run. Marie is now a co-host on the daytime talk show The Talk.

Despite all her career accolades, Marie is also a proud mother. She married Stephen Lyle Craig in 1982 and they had a son named Stephen. After she and her husband divorced in 1985, Marie married Brian Blosil on October 28, 1986. Together, they had two children, Rachael and Matthew, and they adopted five – Jessica, Michael, Brandon, Brianna, and Abigail.

In March of 2007, Marie and Brian announced they were getting a divorce and on May 4, 2001, she remarried her first husband Stephen while wearing the same dress from their 1982 ceremony.

? #HappyBirthday to our incredible son Stephen!! How on earth did you get to be 36 years old… impossible! We love you with all of our hearts ? #MyMom is #29 ?

Marie’s eldest son, Stephen married his wife Claire and they have three boys of their own.

My firstborn Stephen had a quarantine birthday this weekend!! Stephen I love you so much sweetheart, so proud of you and your sweet little family!!! I hope you all are enjoying this sweet time together ? I waited for you to send me a picture to post, but I guess it’s better to get forgiveness than permission… Took these from Claire’s Instagram ?

Before he was a father of three, Stephen ventured into the music business himself and released an EP in 2014. Proud mom Marie shared the excitement with her followers.

In April of 2009, Marie publicly supported her daughter Jessica, who had just come out as gay. In a post on June 7, 2019, Marie announced that Jessica married her partner Sara and said, “I could not love the two of you more.”

Congratulations to my darling daughter Jessica and her new wife Sara! I’m so glad I got to fly in for the day to be…

Happy 28th Birthday to my beautiful daughter Rachael. Wow time flies… now you're a beautiful mommy!!! I love you my Angel ??? ? ??

Some say Rachael is the spitting image of her famous mama, and we don’t disagree!

Rachael and her husband, Gabriel, are now parents to two children – a daughter and son – and Marie loves to give them special shoutouts on social media.

#HappyBirthday to my beautiful daughter Rachael!! ?? I love you so much and the wonderful family you’ve created ! Time for you to be #29Forever like me???♥️

Happy Birthday my angel son!!! ? I love you eternally?

Marie’s son Michael was born on her beloved mother’s birthday, making May 4 extra special to her.

Happy Birthday to my angel son Michael you are so loved!!! I chose to remarry my husband on Michael's birthday so he…

Sadly, at the age of 18, on February 26, 2010, Michael ended his own life after suffering from years of bullying.

Seven is known to symbolize a heavenly number. Well, today marks 7 years since my sweet son Michael's pain and sadness…

She spoke about his suicide on The Talk in 2019 saying, “I have never spoken about this before, but my son, who died, he was bullied. He was bullied very heavily right up until the time that he committed suicide, because of his sobriety.”

#HappyBirthday to my precious son Michael! ❤️ I love you my Angel ? #MyFavoritePhoto #NationalDayOfPrayer

♥️ Happy 23rd Birthday to my handsome son Brandon! ? I couldn’t love you more, you are my angel!!! ?? #TimeFlies

Brandon has also ventured into music, but a very different genre than what his mother is known for. As of 2018, Brandon played bass in a metal core band called Navarre.

Im liking my son Brandon’s #metalcore music! Not just screaming, it has a melody to it. ? Check out his new band Navarre’s first release. Brandon’s playing bass. #MySonRocks #ProudOfYou ♥️

‪?21 years ago today, my son Brandon came into my life. #HappyBirthday ?You are soooo Loved!!! Wishing you a day filled with endless happiness ?‬

Congratulations to our beautiful daughter Brianna and her wonderful husband David Schwep. It was an amazing and glorious day!!! We love you both so much and eternally ♥️? #SweptOffHerFeet ?#SchwepicDay ?

Brianna married her husband David and they have one daughter together. They are currently awaiting the arrival of their second daughter!

#HappyBirthday to our amazing son-in-law David Schwep. Best thing that ever happened to our Brianna. Now you’ll have three girls to take care of! ? We’re so excited for your new arrival ? ? ?

Marie documented the birth of Brianna’s first child, Maude Bailey-Moon Schwep, who was in the hospital after she was born.

Maude has been doing well since then and is now ready to be a big sister!

Gave my darling son Matthew a hug this morning and made breakfast before we both went off to work ? #HappyBirthday my darling 17-year-old! I love You Matthew! ????

The second youngest of Marie’s children, Matthew is very musical, too! Though not a singer, Matthew has traveled far and wide as a skilled saxophonist with his school band!

He’s performed at Carnegie Hall and on the Macy’s Thanksgiving Day Parade, just to name a few.

The youngest of Marie’s children, Abigail finished her senior year of high school in 2020, when most schools in the country had gone remote. Marie was proud of her, even though she wasn’t able to participate in normal “senior” things like prom, grad night, and even graduation.

Marie even gifted her daughter with cute toilet paper earrings to always remember this time!

These last few months the kids who were getting ready to graduate missed out on a lot. My daughter Abby is one of them.It’s been a disappointment for sure but as parents we have tried to be as upbeat as possible. I said, “Honey, I know graduating in the class of 2020 sucks ! But I want you to look back at graduation with joy and laughter. Then I gave her these earrings to memorialize it! I smiled and said; “Congratulations for graduating in 2020, the year of much needed toilet paper. May your life be like the toilet paper roll… Long And Useful.”? She wasn’t thrilled ? especially when I said and now the commencement speech?. I thought about what I would have liked someone say to me that would have helped me through life. So I chose this thought to share with Abby. I AM YOUR CONSISTENT COMPANION. I AM YOUR GREATEST HELPER OR YOUR HEAVIEST BURDEN. I WILL PUSH YOU ONWARD OR DRAG YOU DOWN TO FAILURE. I AM COMPLETELY AT YOUR COMMAND. HALF THE THINGS YOU DO YOU MIGHT AS WELL TURN OVER TO ME AND I WILL BE ABLE TO DO THEM QUICKLY AND CORRECTLY. I AM EASILY MANAGED YOU MUST MERELY BE FIRM WITH ME. SHOW ME EXACTLY HOW YOU WANT SOMETHING DONE AND AFTER A FEW LESSONS I WILL DO IT AUTOMATICALLY. I AM A SERVANT OF ALL GREAT MEN AND ALSO TO ALL MENS FAILURES AS WELL. THOSE WHO ARE GREAT I HAVE MADE GREAT. THOSE WHO ARE FAILURES I HAVE MADE FAILURES. I AM NOT A MACHINE THOUGH I WORK WITH THE PRECISION OF A MACHINE PLUS THE INTELLIGENCE OF A MAN. YOU MAY RUN ME FOR PROFIT OR RUN ME TO RUIN IT MAKES NO DIFFERENCE TO ME. TAKE ME, TRAIN ME, BE FIRM WITH ME AND I WILL PUT THE WORLD AT YOUR FEET. BE LAZY WITH ME AND I WILL DESTROY YOU. WHO AM I? H-A-B-I-T! So Class of 2020 (and everyone else!) what I want to share with you today is your habits can make or break you. Setting good habits can be as simple as beginning your day by making your bed to writing 3 things that you’re grateful for each night… but I think the best habit to have is to strive to have a heart filled with love. Love your family, your friends, those around you and especially the Lord. The more you LOVE, the more LOVE you have to give. Congratulations class of 2020

Marie is a proud mom to all her eight children and her grandkids! We love seeing her post about her family.