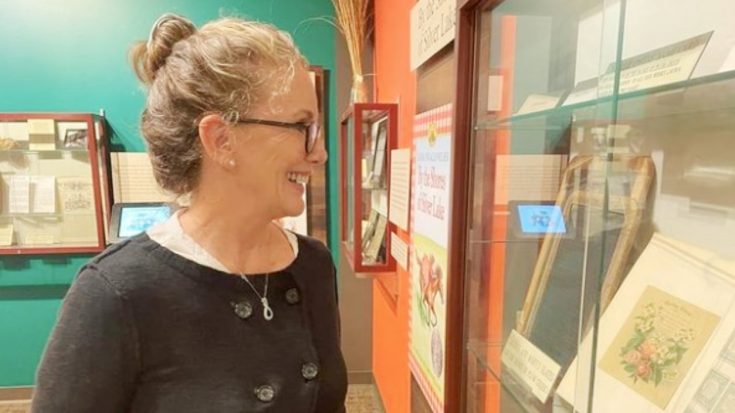 Melissa Gilbert was only ten years old when she starred as Laura Ingalls in the first episode of the Little House on the Prairie TV series. The series was beloved by many, resulting in Melissa playing Laura for the next nine years of her life.

For those who don’t know, Laura was a real person. She authored the famous Little House children’s book series, in which she told stories about growing up on the frontier. The Little House on the Prairie TV series was based on Laura’s books.

Laura died in 1957, 17 years before the Little House on the Prairie TV series aired and seven years before Melissa was born. But even though Melissa never got to meet Laura, she will always be connected to her.

The museum, also known as Rocky Ridge Farm, was where Laura lived from 1896 until the time of her death. She started writing her books while she was living there.

Those who visit the location can tour Laura’s property and view many of her family’s possessions. Melissa shared several photos from her visit that show her staring in wonder at some of the Ingalls family’s artifacts, such as “Pa’s Dear Old Fiddle.”

“Yesterday I had the pleasure of finally going to #lauraingallswilder ‘s home site in Mansfield Missouri,” Melissa captioned the photos she shared from her trip. “If you have a chance to go, you must! The museum itself is fantastic and very comprehensive. But for me, walking through Laura and Almanzo’s homes was so so moving. Thank you to everyone at the Laura Ingalls Wilder Historic Home and museum for allowing my husband and I such extraordinary access.“

Melissa’s Little House on the Prairie co-star, Alison Arngrim (who played Nellie Oleson), commented on her photos. She was glad to see that Melissa had visited the museum, saying, “OMG you FINALLY WENT??!!”

Many of Melissa’s fans spoke about their own past visits to Laura’s home and museum. They were touched to see the photos she shared from her trip, since she played such a huge role in cementing Laura’s legacy.

Scroll below to see all of the photos Melissa posted after visiting Laura’s home and museum. You can tell how happy she was to be there!