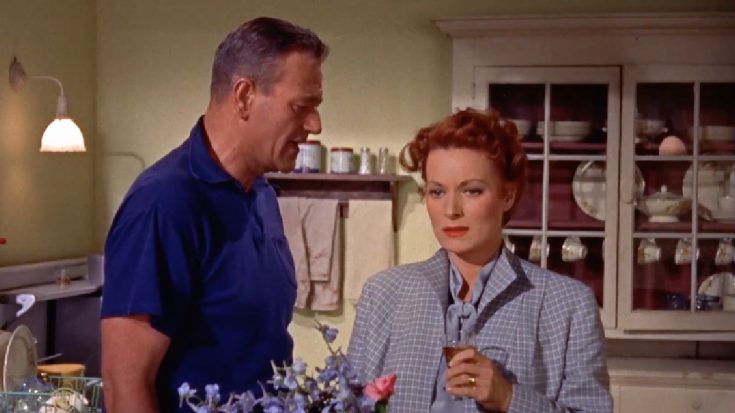 John Wayne and Maureen O’Hara had an on-screen chemistry and off-screen friendship rarely seen in Hollywood. While the pair were never married, they did star in five films together and brought us some of the big screen’s greatest love stories.

Wayne and O’Hara became the best of friends during the 39 years they knew each other. In fact, O’Hara spent three days with Duke prior to his death from cancer in 1979. According to the Irish Times, both knew that Wayne’s time was running out and O’Hara tried to put on a brave face and cheer up the actor who was so distraught by his condition that he contemplated suicide.

During their last time together, Wayne reportedly reflected on the “lousy luck” each of them had from O’Hara’s own cancer battle, the death of her husband in a plane crash, and Wayne’s cancer battle.

After three days of reminiscing about their friendship and remembering special moments they had shared, it was time for O’Hara to say goodbye to the man known as Duke. As she put on her coat and said goodbye to her “very best friend,” John Wayne is reported to have said, “That’s a gorgeous coat. It looks beautiful on you.” Those would be John Wayne’s final words to O’Hara, a woman he once called “the greatest guy I ever knew.”

John Wayne and Maureen O’Hara were introduced through famed director John Ford shortly after the Irish actress came to America in 1939 to star in The Hunchback of Notre Dame. Wayne and O’Hara remained friends, but their friendship blossomed after they starred together in Rio Grande, the first of five movies they would star in together. Other movies would include The Quiet Man, The Wings of Eagles, McLintock!, and Big Jake.

Following John Wayne’s death, it was important to O’Hara that people knew the John Wayne she had the honor of knowing. She once said that “he was always the same…he didn’t change…you could always depend on him.” She also lauded his love of family, his home and his country.