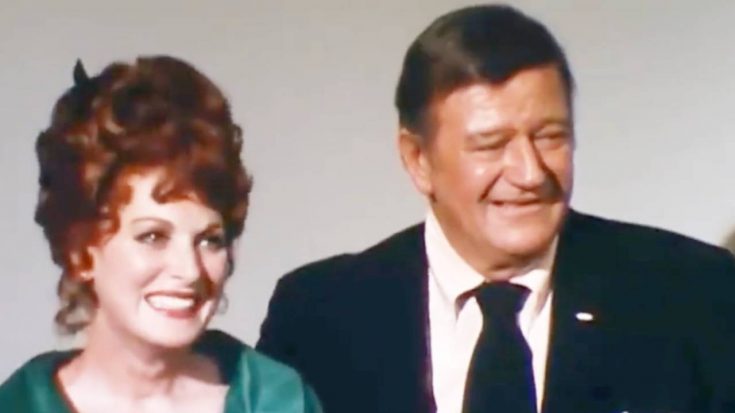 One of cinema’s most beloved pairings was John Wayne and Maureen O’Hara. Both are legends in their own right, but when paired together, the two made magic on the screen.

"There'll be no locks or bolts between us, Mary Kate… except those in your own mercenary little heart!" ? John Wayne and Maureen O'Hara in The Quiet Man (1952) pic.twitter.com/kuMu7p9pVM

John Wayne and Maureen O’Hara in a publicity photo for The Quiet Man (1952) pic.twitter.com/5XEea8RXpz

Their chemistry on-screen and close bond off-screen led many to believe that O’Hara and Wayne were an actual couple.

But their friendship was just that…friendship. They couldn’t have though higher of each other, and they made sure everyone knew!

In an interview posted to Wayne’s official Instagram account, a reporter says, “She’s been your wife a great many times,” and O’Hara interjected, “His fighting partner!”

Wayne laughed and when the sam reporter said, “There’s no way to make her not look beautiful,” Wayne revealed, “[Director John] Ford tried to make her unattractive in a few scenes – and it was impossible!”

They remained close friends until The Duke’s death in 1979. O’Hara spent three days with her legendary friend in the hospital trying to raise his spirits. When he wasn’t feeling great about turning 72, about two weeks before his death, O’Hara told him, “So what? Mileage never hurt a Rolls Royce.”

John Wayne and Maureen O'Hara in a publicity still for Rio Grande (1950) pic.twitter.com/hW9sxX34v8

O’Hara passed away from natural causes in 2015 at the age of 94, reuniting her with one of her dearest friends, as well as her husband Charles Blair.

We are thankful for this partnership in cinema, friendship, and legacy they left behind!