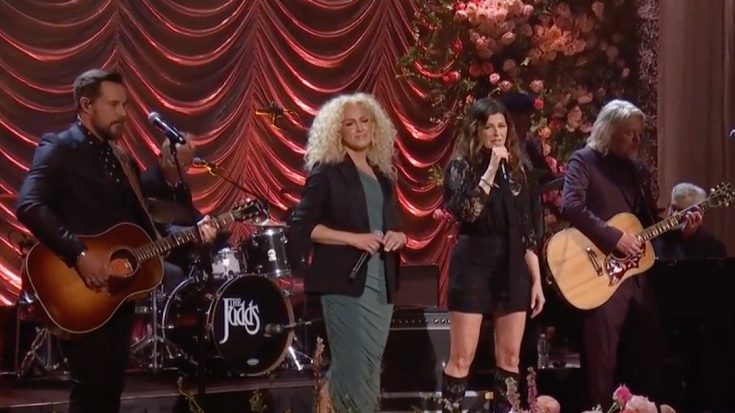 A televised public memorial service for country legend Naomi Judd took place at Nashville’s Ryman Auditorium Sunday evening (May 15). The emotion-filled event featured covers of some of The Judds’ greatest hits from some of Music City’s biggest stars.

One of those covers came from Little Big Town who performed The Judds’ 1985 song “Grandpa (Tell Me ‘Bout the Good Old Days).”

“To Ashley and Wy and the whole family, our thoughts and our prayers are with you. Your music has been the fabric of our lives,” Little Big Town’s Karen Fairchild told Naomi Judd’s family. “And Naomi…it will live with us forever.”

The group fought back tears as they sang the familiar lyrics of the song that earned The Judds their sixth No. 1 hit on the Billboard Hot Country Singles chart and a Grammy Award in 1987.

Little Big Town’s performance was followed by covers of Judds songs from other artists such as Brad Paisley, Jamey Johnson, Ashley McBryde, and Carly Pearce. Naomi’s daughter and The Judds partner Wynonna closed out the memorial service with a performance of “Love Can Build a Bridge,” a song written by Naomi prior to her retirement in the early ’90s.

Naomi Judd died on April 30 due to mental illness, per a statement released by her daughters.

“Today we sisters experienced a tragedy. We lost our beautiful mother to the disease of mental illness,” the statement posted to social media read. “We are shattered. We are navigating profound grief and know that as we loved her, she was loved by her public. We are in unknown territory.”

Watch Little Big Town’s performance of “Grandpa (Tell Me ‘Bout the Good Old Days)” in honor of Naomi Judd in the video below.