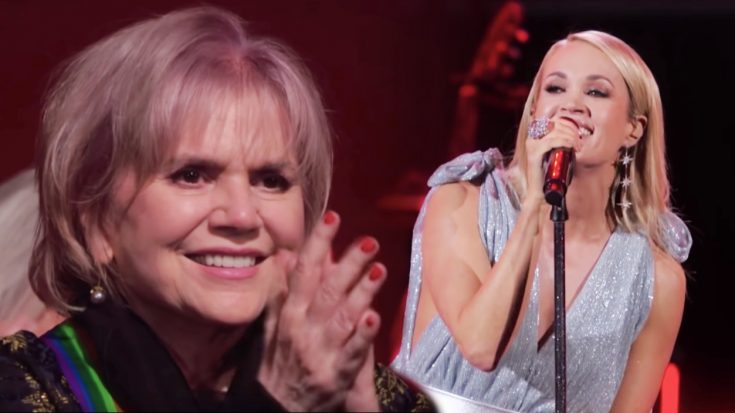 Together at last—your 2019 Kennedy Center Honorees! 🌈

Tune in Dec. 15 at 8 p.m. ET as we celebrate these incredible luminaries during the #KCHonors broadcast on @CBS & streaming with a free trial of @CBSAllAccess.

There were several tributes for each honoree including Tom Hanks giving a moving speech to his onscreen mom from the movie Forrest Gump, Sally Field.

One of the stand-out moments was during the tribute to Linda Ronstadt. Carrie Underwood paid tribute to a woman who she said “broke the rules and sang music that was true to her.”

Wearing a blue sparkly dress, Underwood performed “Blue Bayou,” which is originally a Roy Orbison song, but Ronstadt covered it in 1977.

Once she finished that song, Underwood then sang “When Will I Be Loved,” which the legend released in 1975.

This isn’t the first time Underwood has performed this song in Ronstadt’s honor. When the legend was inducted into the Rock and Roll Hall of Fame in 2014, the “Cry Pretty” singer performed “Blue Bayou” alongside Bonnie Raitt and Emmylou Harris.

Watch that performance below.

The ceremony aired on CBS on December 15, 2019, and it showed Ronstadt smiling through the “Cry Pretty” singer’s entire performance.