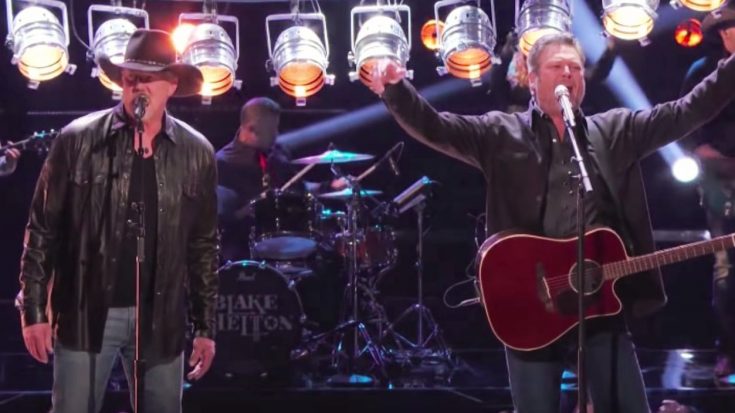 The track was a smash success, as it claimed the top spot on the Billboard Hot Country Songs chart and crossed over to peak at the 40th position on the all-genre Billboard Hot 100. It has since been certified Platinum by the RIAA.

After ten years, the song remains a fan-favorite. Crowds go wild whenever Shelton and Adkins are able to reunite and sing it.

Surprisingly, those ten years passed without any new collaborations from Shelton and Adkins. The two decided it was time for that to change, and released a new duet earlier this year.

The song caught on fast, since fans were thrilled to hear another collaboration between Shelton and Adkins. As of press time, the official music video for “Hell Right” now has over 18 million views.

Even though “Hell Right” was released months ago, it’s still one of the hottest songs in country music right now. So it only makes sense why Shelton invited Adkins to join him on The Voice to perform it.

Adkins is no stranger to the competition series, having served as Shelton’s team advisor during Season 14.

Trace Adkins will serve as the Battle Round Advisor for @BlakeShelton's team on the upcoming season of "The Voice" on NBC! #TheVoice #TeamBlake pic.twitter.com/0zSjwm7Dps

So those who enjoyed seeing Adkins as a Voice advisor surely rejoiced when it was announced he’d be singing “Hell Right” with Shelton during the Season 17 semifinals results show. That show aired on December 10.

The duo performed on a stage that was set up in the middle of the audience. Their performance was enhanced by bursts of fire that flew out of the stage behind them. It was quite the sight to see, and quite the performance to hear!

If you missed Shelton and Adkins’ live Voice performance of “Hell Right,” be sure to check it out below. We never get tired of watching these two sing together!