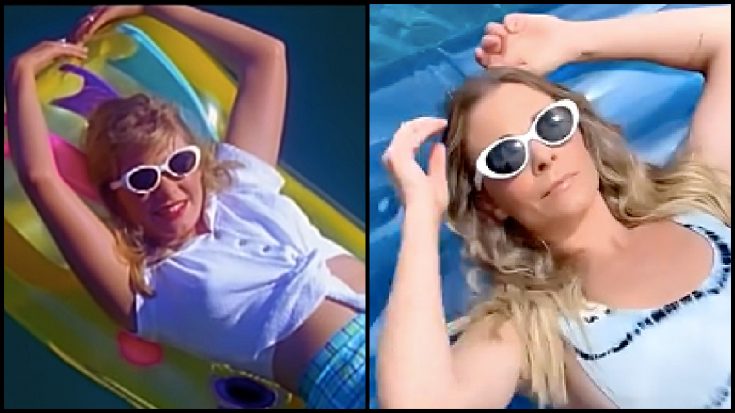 25 years have passed since LeAnn Rimes broke onto the country music scene at the age of 13 with her debut single “Blue.” The singer celebrated the anniversary of the song’s release by recreating part of the iconic music video.

When Rimes debuted “Blue,” she became the youngest country star since Tanya Tucker released “Delta Dawn” in 1972. Rimes’ vocal similarity to Patsy Cline drew praise and shot the young teen to superstardom. “Blue” became Rimes’ first Top 10 hit and the album of the same name topped the charts and was certified multi-platinum.

“Blue,” written by Rimes’ fellow Texan Bill Mack, was pitched to Patsy Cline in the early ’60s but the legendary singer died in a plane crash in 1963 before she could record it. Just over three decades later, the song found new life with LeAnn Rimes and earned both Mack and Rimes Grammy Awards in 1996 for Best Country Song and Best Female Country Vocal Performance, respectively.

The original music video for “Blue” shows LeAnn at a swimming pool in the summer wearing white-rimmed sunglasses. She alternates between lounging poolside, floating in the pool and singing in a studio. Rimes reminisced in a social media post about the song that changed her career, saying:

“25 YEARS OF BLUE ? I can’t believe I’m even typing those words…
25 years since my first album was released
25 years of writing, recording, performing
25 years of you, my incredibly dedicated LovEs
I have SO much planned to celebrate reaching this silver anniversary milestone.”

In celebration of the song’s 25th anniversary, now-38-year-old Rimes flashed back to the music video by recreating part of the iconic pool scene. In the new clip posted to social media, Rimes stumbles upon the white sunglasses she wore for the video. When she puts them on she is transported back in time and finds herself floating in a pool while the familiar song plays.

See Rimes’ nostalgic flashback in the video below.