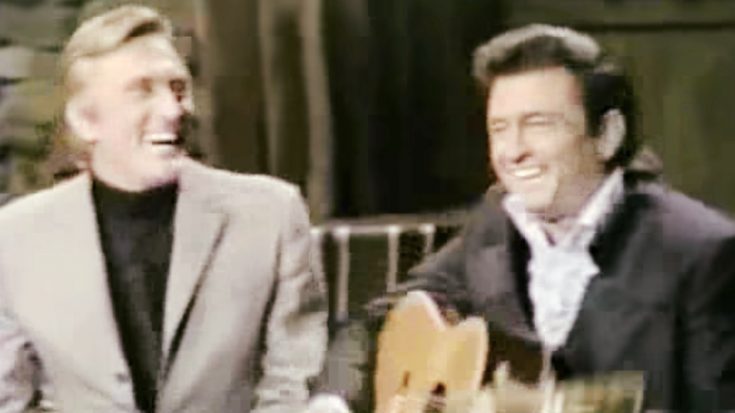 By the time the 1971 film A Gunfight was released in theaters, Kirk Douglas and Johnny Cash were both household names.

Douglas was known for his acting in films such as The Strange Love of Martha Ivers, Champion, Ace in the Hole, The Bad and the Beautiful, Act of Love, 20,000 Leagues Under the Sea, The Indian Fighter, Lust for Life, Paths of Glory, Spartacus, Lonely Are the Brave, and Seven Days in May. He made his film debut all the way back in 1946.

Of course, Cash was also a legend in his own right. He was host of his own television show, The Johnny Cash Show, had already released 23 albums including his highly successful live albums recorded at Folsom Prison and San Quentin, had five Grammys, six CMA Awards, and countless other accolades.

These two men had so much in common with the rise of their careers, yet couldn’t be more different.

Yet, they co-starred in the 1971 movie A Gunfight together. Screenwriter Harold Bloom sent the script to Douglas, who immediately loved it and signed on to star and co-produce. They needed another leading man and Douglas personally sought out Cash to play the role of gunfighter Abe Cross.

A Gunfight,' released on this day in 1971, was Johnny Cash’s second and final theatrically-released film, featuring The Man in Black opposite Kirk Douglas. Access a comprehensive timeline of Cash's life and career on https://t.co/gYE844i6Q2. pic.twitter.com/BDeg98dL0l

Douglas played fellow gunfighter Will Tenneray. The two characters are two famous gunfighters who are in need of money, Though they have no ill-will towards each other, and actually consider each other a friend, they arrange a duel to the death in a bull fighting arena, where the ticket proceeds going to the winner.

Kirk Douglas and Johnny Cash during the shooting of the film The Gunfight, 1971. #ripkirkdouglas #RIP #KirkDouglas pic.twitter.com/kvxBjWAUYb

A year before the movie was released, on February 4, 1970, Douglas arrived in Nashville for the very first time and Cash invited him on his television show. The two engaged in some chit chat and you could tell they got along quite nicely. Douglas’s appearance ended with Cash singing “I Walk The Line,” and Douglas repeating the lyrics line by line!

“He’s singin’ country,” Cash exclaimed to the audience. Douglas finished the performance with an imitation of a train whistle, which garnered several laughs, including from The Man In Black himself.

Douglas passed away at the age of 103 on February 5, 2020 – exactly 50 years and a day after his appearance on The Johnny Cash Show. The two legends remained friends until Cash’s death in 2003.

Douglas even sent Cash a touching letter after his beloved wife June Carter Cash passed away in May 2003. John Rich of country duo Big & Rich has the letter hanging in his office.

Farewell to one of the all time greats, #KirkDouglas This is a letter from him to #JohnnyCash that hangs in my house. Zoom in and read the words from one icon to another. Incredible! #ripkirkdouglas #spartacus pic.twitter.com/Mq8vSKC6uy

We’d like to think Cash and Douglas are singing “I Walk The Line” again together, this time with June singing as well.

Watch the full clip from The Johnny Cash Show below.