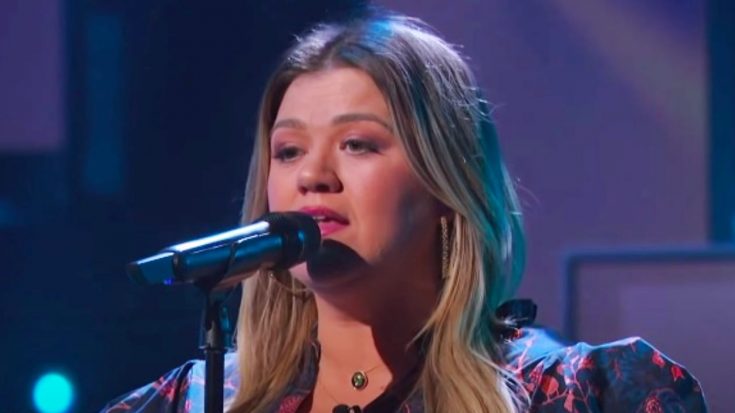 No genre is off limits when it comes time for Kelly Clarkson to pick the songs she sings for the “Kellyoke” segment of her talk show. One of her favorite genres is country, so fans usually get to hear at least one country cover per week.

Clarkson isn’t picky when it comes to the age of the songs she performs. She’s covered modern hits by artists such as Dan + Shay and Carrie Underwood, but has also offered up her renditions of classics by singers such as Dolly Parton and Patsy Cline.

Another classic artists Clarkson has covered on The Kelly Clarkson Show is Willie Nelson. She previously sang “Always On My Mind,” which was famously recorded by Nelson, Elvis Presley, and Brenda Lee, among others.

Written by Fred Rose, “Blue Eyes Crying in the Rain” was first recorded by Roy Acuff. It was covered by many artists afterward, including Hank Williams, Charley Pride, and Johnny Russell.

But Nelson’s rendition of the song is the most recognizable. His recording was released in 1975 off of his album Red Headed Stranger.

Nelson took the song to the #1 spot on the Hot Country Songs chart. The song also crossed over to claim the 21st position on the all-genre Billboard Hot 100.

After Nelson’s version experienced such success, other artists jumped in to cover “Blue Eyes Crying in the Rain” as well. Later renditions of the song were performed by Elvis, Olivia Newton-John, and now, Clarkson.

Clarkson delivered her performance of the song in a soft, subdued fashion. She only had a few members of her band backing her up, which gave her voice the chance to stand out.

As much as we love Clarkson’s powerhouse performances, her talent truly shines in gentle moments like these. Watch her take on “Blue Eyes Crying in the Rain” by watching the video below.

Which country classic would you like to hear Clarkson sing next? There are so many options!