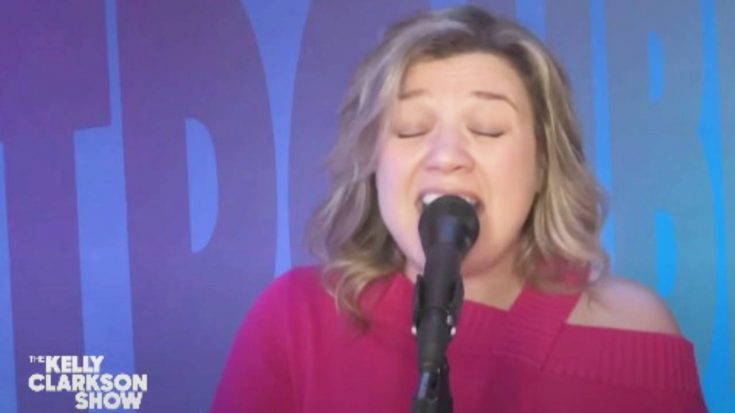 It was recently announced that the Emmy Award-winning talk show The Kelly Clarkson Show will be returning on September 21st for its second season.

A Y'ALL new season starts September 21st ? See y'all there! #KellyClarksonShow

Unlike many shows, The Kelly Clarkson Show runs year-round and is continuing to air episodes from Season 1 that have been filmed remotely. Not only does Clarkson host the show and conduct her interviews via video call, but that’s also how she performs her fan-favorite “Kellyoke” songs.

“Kellyoke” is basically Kelly Clarkson karaoke, where she sings a cover song. All “Kellyoke” songs are submitted by fans, which makes it extra fun. For her August 31st episode, Clarkson delivered a country classic, Travis Tritt”s “T-R-O-U-B-L-E.”

This isn’t the first time Clarkson has covered Tritt on her talk show. Back in February, she performed and awesome version of “Here’s A Quarter (Call Someone Who Cares).”

Clarkson’s voice was a perfect fit for “T-R-O-U-B-L-E,” keeping the gritty tone of the song and giving it an old school rock sound. Seeing that it was originally released by Elvis Presley in 1975, we think she made both Presley and Tritt proud with this one!